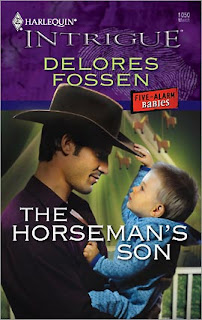 The Horseman's Son
by Delores Fossen

From the moment he first saw his son, ranchman Dylan Greer knew the baby he'd adopted was his in every way that mattered. And no one—not even the beautiful, strong-willed cop who claimed she was the child's mother—was going to change that. Collena Drake swore a criminal ring had stolen her baby and that someone was crossing every line to keep the illegal adoption secret. Now, in order to protect one innocent child, Collena made him a tempting offer: get married and share custody. As a businessman, Dylan thought the plan brilliant. But as a man…resisting his "bride," especially as the danger mounted, would be damn near impossible.

Ms. Fossen jumps right into the action with this novel, and seldom slows down enough to let the reader take a breath.

Dylan Greer has lost everyone he’s loved, including a fiancée and his sister, to tragedy in the past. Still, he opted to take a chance and adopt a son – a son, not a daughter, since women close to him die untimely deaths.

When a woman sneaks onto his property claiming she was the child’s mother, Dylan knows he’ll do anything he can to protect and keep his son, even if it means marrying the woman. Of course, then he’ll have to keep her safe.

Collena Drake is desperate to get custody of her son and proposes to man she hardly knows. She hates the frisson of attraction she feels. What she proposes is a marriage of convenience.

Before they know it, though, there are phoned-in threats, people are attacked and property is damaged. Neither Dylan nor Collena know who they can trust—except each other.

I thoroughly enjoyed the suspense aspect of this book. Delores Fossen knows how to weave an intrigue, that is beyond a shadow of a doubt. The attraction Dylan and Collena feel from the start is also never in doubt, and the tension is palpable. There are few times for them to be alone, but the author plays up every touch, every glance, every gesture.

Still, I found myself doubting that they’d had time to really fall in love by the end of this book. With all the craziness they’d found themselves in, they’d barely had a chance to get to really know each other. I didn’t feel the love, despite feeling the overwhelming lust.

However, that said: if you like an action-packed, sexy book, you’ll find few better than this one.

Edited to add: Congratulations to Melissa K -- today's winner of the "Book-a-Day Giveaway"!
Posted by Long and Short Reviews at 5:59 PM