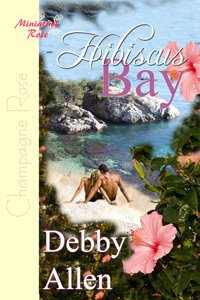 An illicit affair with her boss loses Ashleigh Brennan her job along with her dignity. Untrusting of men in general, she vows never to be misled by first impressions again—until she meets wealthy, handsome Remmao Kamal. He’s full of passion and eastern promise—but for how long?

It’s hard to believe that this millionaire isn’t married, but his playboy lifestyle aboard his yacht has had its repercussions. After a succession of harbor pickups, his misjudgement of a lover’s intention put his life at risk. Since then, he has been determined to put his womanising days behind him—until Ashleigh walks into his life.

Their sexual attraction is immediate and the temptation for Remmao to break his vow of harbor celibacy is as strong as Ashleigh’s desire to protect her heart. But will a one-night stand with no commitments be enough for them?

“Hibiscus Bay,” set in a lush harbor town, is an emotional roller coaster of a romance between Remmao and Ashleigh, two jaded, broken-hearted adults trying to avoid commitment. When they meet by chance in the harbor one evening, their attraction is instant. But even after they spend the night and the following day together, Ashleigh doubts that she will ever be more to Remmao than a harbor pickup. Nursing a broken heart, and guilt-ridden over her own past relationship, she simply cannot trust a stranger with her heart. And Remmao has doubts of his own, since his last harbor pickup not only broke his heart but almost destroyed his life.

These characters operate mostly on lust and immediate emotion, and as such their relationship goes through ups and downs on every page. While Ashleigh is not the most admirable or likable heroine (she’s an adulteress who slept with her boss to advance her career) readers will likely understand her reluctance to trust a handsome playboy like Remmao. Readers will also understand Remmao’s frustration with Ashleigh’s unpredictable emotional outbursts. Ms. Allen develops his character well; he’s a gorgeous Middle Eastern sailor with a body to die for and a heart that needs tending.

The setting of gorgeous Hibiscus Bay is a perfect place for Remmao and Ashleigh to explore their feelings further, and those descriptive details are nicely presented. (On a side note, this novella’s cover is beautifully designed and paints an idyllic picture of the paradise where these characters fall in love.) Although, for me, Ashleigh’s repeated vacillating between her feelings for Remmao and her past hurt drew away some from the development of the romance. However, other readers may feel differently and instead see “Hibiscus Bay” as a romantic one-night stand that turns into something more and lasting.

Posted by The Long and the Short of It Reviews at 8:00 AM