Review: Heart of the Wolf 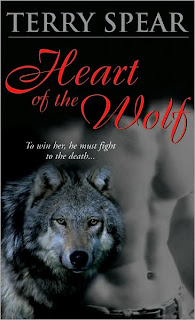 Heart of the Wolf
by Terry Spear

Their forbidden love may get them both killed.

Bella is a red werewolf, sole survivor of the fire that killed her entire pack. Forced to flee her adopted gray pack when the alpha male becomes a vicious threat, she struggles to live as a lone wolf, until Devlyn, the gray male who rescued her as a pup, comes to bring her home. His passion for her won’t be denied, but he’s a beta, doomed to fight to the death if he so much as touches the alpha’s choice of mate.

When the local red werewolf goes on a killing spree, Bella and Devlyn must flee the murderer, the police and their vengeful pack leader. But with the full moon rising, and her heat upon her, Bella can’t resist the pull to her destined mate.
A sizzling paranormal romance based on extensive research on how wolves live and behave in the wild, creating a fascinating world of nature and fantasy.

If you have a love of werewolf stories, like I do, then Heart of the Wolf is right up your alley! This is a fast-paced, entertaining read that keeps you on the edge of your seat.

Bella was a resourceful and strong-willed heroine who, despite those strong character traits, lives her life in fear. Fear of being found by the obsessed Alpha of her adoptive pack and dragged back to the fold to be his chosen mate. She would rather live as a human and avoid werewolf contact than be Volan’s mate, so she runs. She has stayed hidden from her adoptive pack for over 100 years, until one fateful full moon. Through a series of almost ridiculous events that on the surface are actually quite a bit humorous, but are really very dramatic, she is reunited with Devlyn, the gray wolf she fell in love with as a youth. Now, she has to protect the man she would have as her mate from Volan’s insane jealousy.

Bella was a delightful character whose personality alone made me smile on more than one occasion as I read. She had her pros and her cons, as any heroine does, but I found that I really liked her and could relate to quite a few of her thoughts and feelings. She was smart and sassy and incredibly playful when the mood hit her, making for an entertaining read.

Devlyn was just as determined and stubborn as Bella. He’s been searching for Bella for as long as she’s been in hiding. He had been in love with Bella since they were young, but he never thought he could beat their pack alpha, Volan, in a fight for dominance. When he is reunited with Bella, it is at his alpha’s behest that he has come to retrieve her. He quickly admits to himself and to Bella that there is no way on God’s green earth that he can ever give her up, much less hand her over to Volan’s cruelty. Now, he must plumb the hidden depths of his strength and fight for the woman that was meant for him.

I find, at this point, that I have to mention the fact that two of my favorite characters were not Bella and Devlyn, although they were fabulous and well-written. One of my favorite characters was Chrissie, Bella’s neighbor who keeps showing up when Devlyn is… less than dressed! Devlyn’s complete lack of modesty adds to the humor of each situation. My other fave character was Henry Thompson, better known as the zoo man! He had his own knack for showing up at opportune moments, okay, not so opportune moments. He’s a good guy trying to help, but as he’s working with only part of the puzzle, he’s not always helpful. These two added a bit of comic relief to an already exceptional cast of characters. I got a kick out of trying to figure out what hijinks they would be part of next.

This action-packed, fast-paced adventure was a page turner that moves from moment to moment with an interesting subplot involving a murdering red werewolf, which is resolved in an unexpected way. As we move from the wilds of Oregon to the city of Portland to the zoo (yes, the zoo… and a funny story that is!) we are given a glimpse into a love that is amazing in it’s intensity as Bella and Devlyn fight for the right to be together. Terry Spear is a fabulous voice in the supernatural genre, and I look forward to more from this author. A fun, rather intense read that will keep your interest till the last page.

Posted by The Long and the Short of It Reviews at 12:47 AM