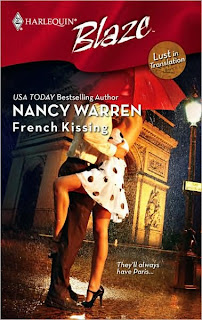 Manhattan magazine editor and fashionista Kimi Renton is one of the beautiful people at couture week every year. But this time she’s stuck with a rumpled P.I. posing as her photographer. Holden MacGreggor is tough-guy gorgeous – and badly attired. So if he’s going to play the part right, she’s going to have to dress him properly… then undress him slowly.

Soon they’re having so much fun under the covers they almost forget that they’re supposed to be undercover, busting up and international theft ring. Then ooh, la, la turns into oh-oh when they’re found out.

Could this be the last tango in Paris for both of them?

This was an appealing book on so many levels with a rather unique premise. It definitely appealed to me and I was glad that I picked it up off the rack.

Kimi Renton is relatively happy with her life. She has a love of clothing that she has been able to turn to her advantage as a fashion editor for a magazine. There are only a few things missing to complete that happiness, but she is at least content with what she does have. Her family ties are a source of unhappiness, and I felt her pain as she relates her past hurts and trials. I loved that she was an ambitious woman without being heartless or cruel or just a plain cold witch. She was warm and fun-loving, while being devoted to her career and the fashion world. I liked Kimi and felt as if she would be a great woman to have as a friend. When Holden pushes his way into her life, she’s obviously not very happy about it. What is she going to do with a rumpled P.I. who is obviously not the least bit interested in the fashion he is supposed to be photographing. Seems like a makeover is in order, but she soon finds she can’t change the man underneath and that she doesn’t even want to.

Holden MacGreggor could care less about fashion. His interests lie in the great outdoors and photography. When he gets himself assigned to Kimi as her photographer, he thinks it’s a stroke of genius… until Kimi informs him that she won’t be seen during couture week with him dressed as he is. Holden doesn’t really see what is wrong with his comfortable clothing that serves the purpose of keeping him covered! I loved his tough-guy persona. He was all-business when he needed to be, but he could see how his appearance could mean bad publicity for Kimi and her magazine. The fact that he had an amazing eye for color and composition only made him that much more appealing to me. His dry sense of humor and amazing ability to bring on the heat had me firmly in his corner and half in love with him myself.

This was an exciting, sensual journey through Paris that left me gasping on more than one occasion… one particular photographic journey through the Paris streets at night comes to mind! I loved how Nancy Warren combined high fashion with a world of intrigue that I never would have imagined. As I’m a fashion-loving girly-girl who wishes I could afford to be a fashionista, this book just grabbed me and held on all the way to the end. It was fun to see the heat build between Kimi and Holden, and to witness them fall for each other despite their obvious differences. Holden’s complete protectiveness of Kimi made me all warm and tingly, even when neither of them realized that it was a sign of deeper feelings. Throw in the interesting cast of characters that tag along for the ride and you’ve got yourself a fun and exciting read.

I found this to be a very enjoyable book that I highly recommend you take a look at if the combination of high fashion, action with a bit of suspense and a lot of heat is at all appealing to you... and come on, who wouldn’t find that appealing?

Edited to add: Congratulations to Pam P. -- today's winner of the Book-a-Day Giveaway!
Posted by The Long and the Short of It Reviews at 5:45 PM