Review: Flame From Within 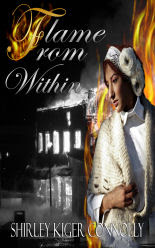 Flame From Within
by Shirley Kiger Connolly

A journey across the sea begins a journey of healing for Aimée's soul and a discovery of love and faith she thought she'd never find. When a Yankee-induced fire destroys her family and her home, young plantation-bred Amethyst Rose finds herself on the run. Angry towards God and the men in blue, Amethyst's only choice left is to move in with her elder and controlling sister, who runs a bordello in The French Quarter of New Orleans-a decision guaranteed to destroy Amethyst's personal respect and tarnish her family name. With her bitter hatred towards all Yankees plunged into high gear, nothing seems to matter anymore, until, on a riverboat en route to New Orleans, she finds herself intrigued by the presence of not one, but two Union officers. Each in his own way find ways to tug at the heart and soul of this woman lost.

Flame From Within by Shirley Kiger Connolly opens with a dramatic poem, giving us a hint about a certain character I think, alerting us to the faithful and compassionate warrior. Rarely throughout, a brief stanza is supplied. Surprisingly, these do not draw one away from the story, but rather, offer a tiny insight into character.

This historic romance - set in nineteenth century America, the Civil War south in fact - is immediately engaging. Amethyst Rose Lebrun (Aimee) is an honorable lady of the south, although not at the most advantageous time to be one. She is far from a 'southern belle' in both attitude and appearance. Although some people she runs into will remember her as the attractive Mllle Aimee, the realities of war, and of hunger and exhaustion change outward appearances. Still, she attracts unwanted - (and yet critical) attention from certain northern troops (most definitely her intention.) It is not a matter of simple courtesey she must deal with, but, from the first, guarding her safety, and her honor. Yet, she feel is imperative she takes on a dangerous journey, to New Orleans. Everything she loves has already been destroyed, and she has no clear idea of what to expect where she is headed.

One Yankee officer, Captain Palmer Jordan, has a far better understanding of the dangers she might encounter and sees beyond the surface to realize that 'Aimee' is more than a poor street person. His own sympathy is engaged from the start. Sympathy- yet more; Jordan's machinations would capture this young lady at the altar, and if affection will not convince her, then he is not above using logic...

Aimee is not one to be manipulated, but her situation is desperate. She does find friends along the way. She sympathizes with the wounded and struggles to make a place for herself in this unpredictable world, caught as she is, in the midst of armies. Faith, and finding strength in faith is an important theme at times, but this is one point that seems to be touched on only occasionally.

This romance is truly an affair of the heart and will engage your emotions, as well as your imagination. Connolly's almost-poetic descriptive phrases, well developed scenes, and penchant for complexity even in supporting characters will make you believe you are looking directly into history.

This is a long, epic tale. It kicks off with some strong characters, obvious conflict, and extremely well-described locations. This reader was immediately engaged, but I must confess that the super-long is not my favorite. I had reservations - could Connolly maintain my interest throughout? Would the middle of the tale fall flat... would... but no. These is a beautifully written historic romance, and I recommend it highly. Find a warm spot by the fire on a snowy day, and curl up with this incredible epic. I'm going to go have a second read...

Posted by The Long and the Short of It Reviews at 8:25 PM