Review: The Fire Within 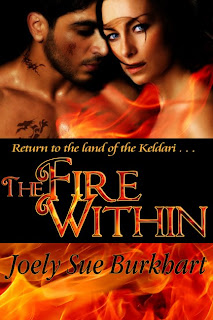 The Fire Within
by Joely Sue Burkhart

All Eleni has ever known her entire life are Shadows.

Born to a bastard branch of the Green Lands’ royal line, she has only one chance to escape her brother’s torment. The only place in all the world far and dreadful enough to deter him might be the savage land of Keldar. Under pretense of securing him allies, she will find sanctuary with the fiercest, most powerful Keldari warrior she can find.

According to prophesy, the supreme leader of the tribes will be declared by a White Daughter from a land beyond the burning sands. Zahak purchases a captured woman of the prized blood to deliver to his brother. However, Eleni has set her bright, shining eyes on him, and his plans fall apart one by one.

Stalked by her powerful brother in dreams, Eleni brings Shadow and turmoil to the tribes. Will Keldar be bathed in Fire, or lost to Shadow forever?

This is a powerful fantasy novella that will sweep readers away with its suspense and passion. I do not normally read this genre of romance, and I’m not sure I would pick up another, but The Fire Within was quite well written and kept me captivated from the opening pages.

Eleni is desperate to escape the power of her murderous brother, Darius, for whom she has done terrible things in the name of blood and devotion. She travels to the land of the Keldar under the premise of winning the fierce Keldari warriors over to her brother’s side. Once there, though, she discovers a brutal desert world without water or love. The Keldari, who are all waiting for the Agni to come and end their existence, fight and kill each other almost daily, in an ongoing battle for survival.

Zahak is the Keldar warrior who finds Eleni and protects her, and when he discovers that she is different from other foreign women – she can drink their Fire Tea without dying, and she possesses the power of the White inside her – he is mesmerized. However, duty dictates that he must turn her over to his brother, Amin, whom he has devoted his life to protecting until the coming of the Agni.

As their journey progresses, Eleni and Zahak are drawn to one another, and when the dragon inside him mates with the power inside her, they are bound by blood for all time. Darius is determined to take revenge, however, and when the Agni does come, and when Zahak must face down not only the rage of Darius, but of his own brother, readers will wonder whether soul mates bound by blood really can overcome the end of the world.

This romance is powerful but dark. Readers may be overwhelmed by the number of brutal scenes that involve pain and torture. However, I did think the details were vivid, well written, and necessary to the story. The final third of the story, where Eleni and Zahak face the end of the world together, is powerful. Along with all the battle scenes, the love story is well developed, though again, it is less tender than painfully passionate.

The one thing that kept me from fully engaging myself in this story was the need to understand the language and culture of this fantasy world. Because I do not normally read fantasy, it took me a while to get used to a new set of words and concepts that rule the world of the Keldari. Readers may stumble as well; it’s really like trying to read in a foreign language. However, others who are used to this genre may adjust more quickly than I did!

Despite the physical, emotional, and psychological torment Eleni and Zahak must endure, the way they find hope and power in each other is inspiring. Ms. Burkhart has created a strong story that will leave a lasting impression on her readers. If you’re squeamish, be prepared for some graphic scenes; however, chances are you’ll be swept into this story of love and devotion in the face of anguish and death.

for Amazon Kindle version
Posted by The Long and the Short of It Reviews at 7:40 PM