Review: Eye of the Beholder 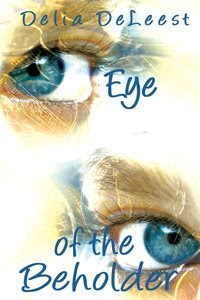 Eye of the Beholder
by Delia Deleest

A marriage of convenience isn't what Adeline Pierce had in mind for her life, especially since she was practically engaged to the man of her dreams. But, time is running out for her critically ill brother, who needs to move to a warm dry climate or face certain death. A move of that magnitude requires a lot of money--money her family doesn't have. When Will Denning, a man physically and emotionally scarred from his time in the trenches during World War I, offers her family the money they need in exchange for her hand in marriage, she feels she has no other option. Learning to love Will is hard enough, but it's made even more difficult by the fact that her former love is determined to do whatever it takes to drive them apart, including murder.

Heartfelt and charming, Delia Deleest's latest romance, "Eye of the Beholder," will enthrall readers. You will love both the hero and heroine, and before halfway into the story, will have so many hopes for both of them!

The plot is fast paced, witty, and utterly unpredictable. Modest Adeline lands in the soup - although it was her own, heartfelt efforts to do a good turn that land her there! Young and earnest, Adeline resolves to do her best, and in so doing, becomes the kind of character we love to admire, and of course, wish all the best for. She is perhaps not the most complex of characters, but she is sweet

Wealthy William Denning, who first operates through a representative, is at best a shadowy figure. When he does step forward, he embodies so many different beings - from a man that seems eminently admirable, and perhaps pitiable, to possibly someone so scarred by life that he should himself, be feared. As readers, we will be certain we can predict his motives, as well as the coming twists in the plot. Nothing could be further from the truth. The depths of Denning's character will only slowly come to light - and his life, seemingly finding a parallel in the movie world, might be considered a tragedy. Much of the plot revolves around the man Denning truly embodies.

Although, things are not quite that simple. Adaline already has a dedicated admirer, charming Mic Rafferty. Rafferty has everything Denning lacks - from looks to charm. He's also been a dedicated admirer for a number of years. Adeline has his love and support, if not his understanding. He is so charming, you cannot but feel that somehow, things will turn around. Adeline has the support of a warm, if needy, family. Even the community that surrounds her - from casual friends, Denning's housekeeper, to the lady who runs Mic's boarding house, are well thought out, and well-meaning characters. Heroism comes in many forms, and several of them are to be found here.

This delightful romance is enchanting. Deleest's attention to detail, and to the nuances of emotion is extraordinary. Loyalty and friendship are explored... and love. Romance is the heart of "Eye of the Beholder." don't miss it.

Posted by The Long and the Short of It Reviews at 5:56 PM