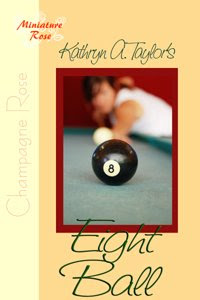 Eight Ball
by Kathryn A. Taylor

Dr. Tracey Nichols doesn’t have time for the fun in her life. Work at a Hospice, as well as the local hospital, absorb her waking hours but her interest in the anatomy of the handsome playboy mechanic manages to capture her dreams.

Denzil Wright loves to flirt. He’s not ready to be any woman’s Mr. Right until he has the chance to spend time with one dedicated, workaholic doctor.

Can love create common ground between the intellectual, labcoat-trussed doctor and the free-wheeling, blue-collar worker?

This was a fun, sweet and quick read that brought a smile to my face. I had a grand time reading it.

Tracey Nichols is a bit… repressed. She’s so focused on her career that she doesn’t really have the time or the interest to pursue more pleasurable activities. No one really blames her as she’s good at her job and a very compassionate person. The drawback to that workplace devotion is that she has a nonexistent personal life. When her best friend pushes her to take a chance she finds herself drawn to Denzil Wright. The problem as she sees it… there is no way she could hold his interest for any length of time.

Denzil Wright is a serial flirt. He loves women, and they love him. He’s never really felt the urge to settle down or to even settle for one woman until the shy Dr. Nichols catches his eye. Something about the sweet, sexy doctor draws him, and he’s helpless against the pull. He’s felt the attraction for some time before the doctor finally takes note. The problem as he sees it... he doesn’t think someone as smart as the sweet doctor could ever stay interested in a simple blue-collar man.

It was such fun to see these two people who were so very different find common ground. Denzil is such a fun-loving character and he continually brought a smile to my face, as well as to Tracey’s. Tracey was so very hesitant about her own personality that I found I wanted to push her toward Denzil just so she could see that she was more than her title. The journey for both Tracey and Denzil was charming and I was anxious for their happy ending.

The only drawback to this tale that I could find was the sometimes overly flowery dialogue and descriptions. At times I felt that the situation or setting may not have called for such verbose descriptions as were used. While this is my own, personal opinion, it did make it a bit hard for me to follow along easily with the plot.

Despite the above mentioned issue, I enjoyed this short story about how preconceived notions can be all that stops us from experiencing love. In Eight Ball the journey to get past those notions made for an amusing and enjoyable story that would appeal to those looking for a light-hearted and quick read.

Posted by The Long and the Short of It Reviews at 5:35 PM