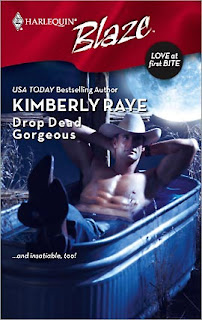 Dillon Cash used to be the biggest geek in Skull Creek, Texas – until a vampire encounter changed him into a lean, mean sex machine. Now every woman in town wants a piece of the hunky cowboy.

Meg Sweeney can’t get over her old friend Dillon’s transformation. Not only does she want him, but she’s also dying to figure out how he did it. Because Meg is a former geek herself. If Dillon can suddenly morph into a stud, who’s to say there isn’t a sex kitten waiting to be unleashed inside her? She just needs a little instruction…

Dillon’s never been able to refuse his best pal, Meg, anything… even sex lessons. Little does he guess that one life-changing night in her bed will leave him dying to live again…

I had a grand old time reading this book! It had it all if you ask me, and since you’re reading this… you are asking me! *G* It had a touch of suspense, a little bit of danger, lots of tension and heat, and enough humor to keep me entertained throughout the entire book.

Meg Sweeney is desperate! She wants to break away from the perception everyone in her small town has of her. They actually call her Manhandler Meg… wouldn’t you want to get away from that moniker? She’s been known her whole life as “one of the boys”; she knows all about sports, how to play them, who to pick in the betting pool, anything you could want to know. But, she’s also a sexy, sensual woman who doesn’t think anyone in her town will ever see beyond the tomboy to the stylish woman she’s become. When her oldest and dearest friend makes a miraculous transformation she’s desperate to know his secret. Once she corners him and feels the sexual pull for herself she strikes a deal with him: He gives her sexy lessons and she’ll redo his entire wardrobe for him… whether he wants her to or not!

I loved Meg and her spunky self. The fact that she’s in complete denial of a part of her personality just added a certain vulnerability to her that made me like her more. Her continuing efforts to be “more sexy” were quite comical, especially considering the fact that she already was incredibly sexy. Her determination that she wouldn’t fall in love with Dillon, despite all the signs to the contrary, was interesting to watch and I found that I couldn’t wait to see how this author would bring about Meg’s happy ending.

Dillon isn’t desperate anymore! Almost his whole life he’s played it safe, and became one of the biggest geeks in town. When he finds himself transformed into a vampire… it’s goodbye geek, hello sexy! He now has women falling all over themselves to throw themselves at his feet. He’s bound and determined to prove once and for all that his geek days are past, and sets about sleeping with every woman who makes herself available… which happens to be :::clearing throat::: ALL of them! Well, all of them except for his good old friend, Meg. She seems to be immune to his new vampire charisma. He convinces himself that she’s just the biggest challenge and when she proposes sexy lessons he jumps at the opportunity to make her fall at his feet like all the others. He doesn’t count on the fact that he seems to be falling at HER feet.

Dillon made me laugh, and fan myself. His own bouts of denial made him just perfect for Meg and I couldn’t help falling for him like all the other ladies in his world. I absolutely adored his own vulnerability when it comes to his past and upbringing. As he finds himself falling further for Meg, I was rooting for him to sweep her off her feet despite her denials. These two were just perfect for each other… and each time they brushed off their feelings as lust or simple animal attraction I wanted to smack them, but at the same time it was so entertaining watching them struggle.

This book was incredibly well-written, and I greatly enjoyed it. Gone are the days where you don’t want to pick up a category romance because it just won’t be as good as others and you’ll just be disappointed. I was anything but disappointed with this book and this author. There was witty dialogue as well as incredible sexual tension leading up to and including the actual consummation of their relationship, the plot was interesting with an amazing cast of characters that add a bit of the zany into the mix. All that and the ending was a surprise that wasn’t expected, at least not by me!

There were moments of hilarity interspersed throughout the serious business of falling in love and dealing with dark, enigmatic vampires. One such comical episode sticks in my head, involving Meg and Dillon’s parents and an incredibly misguided attempt at “saving” their son. You’ll just have to read the story to find out what I’m talking about. As of now I can't quite wait to read the next installment of the Skull Creek vampires. All in all, this was an incredibly well-written, fun, hot, exciting read and I can’t help but recommend it to anyone who likes all of the above!

Edited to add: Congratulations to Karin -- winner of this daily giveaway!
Posted by The Long and the Short of It Reviews at 4:23 PM