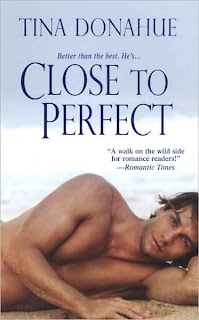 Close To Perfect
By Tina Donahue

Real estate mogul Josh Wyatt is hotter than hot. That body. That wicked grin. Those eyes. The man can melt panty elastic with just one look – hell, he could melt driveway ice with just one look. And the tabloid photos of him emerging – naked – from his very exclusive Florida pool just got him voted the year’s most delectable hunk by women all across America. Time to get a bodyguard and fast. But the minute he meets sultry, leggy ex-cop Tess Franklin, Josh knows he’s met his match…

Kick paparazzi butt? Check. Scare away his lust-crazed fans? No problem. Pretend to be his girlfriend? Sure. Practical Tess would never say no to an easy gig like that. But Josh is even hotter in person than he is in those amazing photos – and Tess Franklin is about the experience an extreme meltdown… in his arms.

I just loved this book! Author Tina Donahue has such a way with words, and I was simply mesmerized throughout the entire book. This would go on my keeper shelf, if I wasn’t giving it away… as it is I may go out and buy it for myself again! It was that good.

Tess is a feisty, spicy heroine that knew what she wanted out of life. No matter how beautiful others perceived her she had always been ready to follow in her police officer father’s footsteps, much to his chagrin. She is just as determined, when she leaves the police force, to join her father in his personal security business… despite all his loud objections. When she goes after the lucrative contract to protect Josh Wyatt, failure is not an option. The surprise comes when she is immediately attracted to the sexy tycoon, and can barely keep her hands to herself… not that he really wants her to in the first place!

I just loved Tess, she was everything I like about a modern heroine. She was feisty and headstrong, confident and daring, not to mention loyal and devoted to those who had earned the privilege. When she was faced with a challenge that would send most women running in the other direction, Tess stood tall and faced it head on. Her immediate attraction to Josh was interesting to watch as it grew and consumed her until it was almost too difficult for her to focus on anything else. Even with that, she was very serious about her job. Her wit and sarcastic humor just added more to the story as she and Josh butted heads on more than one occasion. A truly lovable heroine.

Josh Wyatt is incredibly chagrined to find incredibly personal pictures of him on the front page of the city’s most notorious tabloid. As he’s a pretty private person, it’s rather disconcerting to find so many people not only know his name… but know what he looks like from behind without any clothes on. Now he finds himself dodging sex-crazed women who have no idea what he’s truly like, only that they want to be famous too, or rather infamous. When Tess Franklin walks into his office and proposes that he hire her as his bodyguard he knows he’d be a fool no to take her up on her offer. He would do just about anything to get closer to this interesting and amazing woman.

Josh was funny, sexy and just plain smart… except when it comes to relationships. He was definitely an Alpha male and I have always asserted how very much I love a truly Alpha male, especially when he’s utterly helpless in the face of one little woman. Granted, Tess is quite a dynamo, enough to leave any man reeling, but it was completely endearing to see what Josh was willing to go through to keep Tess in his life… even face her ex-cop, scary as all get out father and his cronies!

This book has so much going for it, and I’m kind of sad to see it go… at least until I can grab up another copy! The characters were so vividly portrayed that I kept thinking I could have met them somewhere before. When it came to descriptions of events and settings, I felt as though I had stepped right into the paradise that was the setting of this romance. The tension between the two was maintained from the moment they met until the last page. There was incredible heat building up to the culmination of all that tension, and even though this is considered hot, we don’t actually see any sex until almost the end of the book! The sensuality came, amazingly enough, more from both Tess and Josh’s imaginations than from any actual sexual interaction.

I loved the insight into what made each of them tick, and what they were hoping for, physically, from their relationship. Don’t get me wrong, they had plenty of foreplay and flirting that had me fanning myself and getting just as frustrated as Josh and Tess when they were inevitably interrupted. Tina Donahue sure knows how to pour on the heat, and pull you into the hearts and minds of her characters so that you feel completely invested in how their tale will end! I’ll definitely be on the look out for more books by Ms. Donahue in the future, and I’d suggest you do the same.

Congratulations to LOIS -- today's winner of the book-a-day giveaway!
Posted by The Long and the Short of It Reviews at 11:03 PM