Review: A Bride So Fair 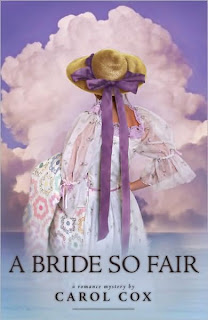 A Bride So Fair
by Carol Cox

A young woman searching for independence and adventure

A handsome Columbian guard striving to protect and defend.

A little boy caught in a web of intrigue and deceit.

Emily Ralston is thrilled when she lands a job in the Children’s Building at the Chicago World’s Fair. And the White City seems to be living up to its promise of excitement when she meets a handsome Columbian guardsman. Surely Emily’s not the only one to sense hte spark of electricity between them?

When Stephen Bridger finds a lost child, he delivers the boy to the Children’s Building to be cared for until his mother is located. But when a dead body believed to be little Adam’s mother is found, a mystery begins to unfold. While unraveling the truth, Emily and Stephen are drawn deeper int danger and closer to each other.

Can Emily and Stephen solve the mystery before time runs out?

Will Stephen find the grounds to win the heart of one so fair?

Emily Ralston grew up in an orphange. So she knows just what lost little three year-old Adam will face if she turns him over to the authorities when his mother doesn’t pick him up at the end of the day. A decision based on her heart and not her head leads Emily into a series of problems that endanger her budding love relationship with Columbian Guard, Stephen Bridger. Of course, that’s the least of her problems when it becomes clear her choices also put her life and those of the ones she loves most in the world at stake.

This was a sweet romance with a well thought out plot of murder, mystery, and danger. The characters were well developed and easy to like. There’s quite a cast of secondary characters that are almost as endearing as the main characters. Yet they stay in their places and don’t steal the scene too often. The historical aspect of the story was well done. Set in 1893 during the Chicago’s World Fair, A Bride So Fair really took me back to that place and time. I truly felt I was there, walking the grounds of the fair and hearing, seeing, smelling all that went on there. I liked Emily and her determination to protect little Adam. From danger, yes, but also from the hardships she knew all too well from having grown up as an orphan. I also liked the way Stephen was protective of Emily, Adam, and the others in the story. Yet without being overbearing.

The story also deals with redemption and God’s forgiveness, no matter what sin one has committed. It was dealt with in a loving and compassionate way that brought tears to my eyes at one point.

After the exciting climax of the story, however, I felt the last two chapters dragged on unnecessarily. They could have been cut down and blended into one “wrap up” chapter, and it would have been just as satisfying, if not more so. I still enjoyed the story, and felt it was very well done. When I first received this galley for review, I wasn’t aware it was the third book in a series. Now that I am aware of that, I want to get my hands on the first two. Highly recommended for women of all ages.

Posted by The Long and the Short of It Reviews at 4:20 PM