Review: Breaking All The Rules 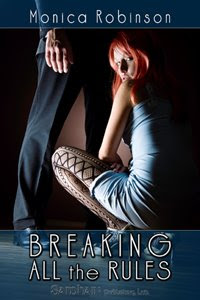 Breaking All the Rules
By Monica Robinson

What happens when the rules we create for ourselves end up being the ones we most want to break?

Between flying tequila bottles and auctioning off body shots, Allie McAllister knows how to work a crowd. When she isn’t mixing drinks at The Guild, she devotes her spare time to teaching aspiring authors—namely, male authors—how to make women melt with nothing more than a pen and paper.

The Mistress of Seduction has only three rules for her students: 1) Six months is the limit; 2) When she speaks, they listen; 3) Never, under any circumstances, are her students allowed to fall in love with her.

Her newest student has a lot to learn when it comes to putting his passion to paper, but there’s nothing Allie craves more than a challenge.

Criminal defense attorney Adam Carlton is well aware he doesn’t have a creative bone in his body. Just the same, after taking a body shot off the most beautiful spitfire he’s ever seen, he has to see Allie again. But how? Then it hits him.

Breaking All The Rules is reminiscent of the movie Cocktail except this story is a lot hotter, more romantic and includes a heck of a better ending that will not only appeal to romance readers but writers too.

I enjoyed reading about Allie because not only does she teach about writing, she herself is a writer. Allie has the spunk of Joan Wilder in Romancing the Stone and the sought after 'stone' in this story is Allie's heart. I found her rules for teaching to be intriguing - the best of everything without risking her emotions. Even sex for altruistic ideals isn't enough to stop the feeling at some point that something is missing. Allie's been successful in holding the fort around her heart until she meets Adam. I liked seeing her slowly flounder into love with Adam.

Adam was endearing, handsome and clever yet for all his brains and cleverness, his inspired ploy to get close to Allie goes into a tailspin. His initial pursuit runs the gamut of emotions that get entwined with his own family. I love it when there are successful family dynamics to support the fullness of the conflict and plot. Another thing I liked was even though writing is in his family genes, Adam doesn't even have the talent to write a paragraph. That portrayed him as a very human and likeable character. His lack also provided a realistic personal conflict that shredded Adam bare and made him realize what Allie means to him.

The secondary characters were well placed, effective in moving the plot and in supporting Adam and Allie's story. There is depth and dimension to them that I don't often see and I marveled how well the author worked them into the story.

The scenes when Allie and Adam come together are hot and steaming but are incredibly romantic. I don't want to give a spoiler away but Adam's final desperate act to prove his love for Allie just warmed me down to my toes. His expression of love is so total and unequivocal, it made Hercule's' trials a mere pittance in comparison. Once you read it, you'll have to ask yourself; "Could I do what Adam did?". And I think you'll agree it's totally romantic. I'd fall for Adam or any man who'd go to those lengths to prove his love.

Breaking All The Rules is a delight and thoroughly engrossing - a solid romance no matter how you look at it. I think you'll enjoy the well rounded story of two unlikely people falling in love despite their differences and the happy feeling you'll get when you reach the final page.

Posted by Long and Short Reviews at 10:21 PM