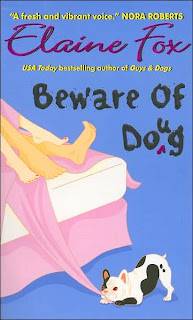 Beware of Doug
by Elaine Fox

But then there's Doug...

The real ruler of the roost - Lily's noisy, nasty, match-mauling pooch - Doug likes to greet anyone he dislikes with yaps, nips, and very unpleasant surprises. And Doug does not like Brady. (Doug, in fact, doesn't like anybody - except Lily, of course. And, oddly enough, the squeaky clean, partner-track attorney whom Lily's domineering dad would love for his dutiful daughter to marry.)

Brady's no canine fan to begin with - and Doug's the devil-dog incarnate! But Lily could never get serious with anyone who doesn't click with her precious puppy - so Brady's going to need a lot more than great looks, smooth charm, and hot passion to get himself out of the doghouse and into Lily's life!
Elaine Fox has done it again. She is a pro when it comes to bringing on the heat and the laughs, and Beware of Doug is no exception.

Lily loves her dog, and normally that would be okay. Except in her case, she thinks her Doug can do no wrong. He's an angel as far as she's concerned and it's rather comical to see everyone else's response to her dog and his antics. All Lily wants is a man who can get her excited and who can get along with her dog. That to her is the perfect combination... too bad the one man who has consistently made her all hot and bothered doesn't get along at all with her beloved pet.

Brady is a motorcycle-driving, jet-flying hottie. When he moves in next door to Lily, he's convinced that she's what he wants. What he doesn't want is her yappy, mean little punk of a dog! When he keeps finding "presents" on his doorstep, and parts of his shoe wardrobe keep going missing, he has a devil of a time convincing Lily that her little darling is responsible. All he needs is to convince Lily that he's telling the truth and maybe they can move on the amazing attraction they feel for each other.

As always, I had a great time reading this offering from Elaine Fox. The scenes written from Doug's unique perspective kept me laughing and wondering what in the world he would do next. The interactions between Doug and Brady were hilarious as each tried to establish their dominance in Lily's life. As the story moves along, though, they actually learn to get along. It was fun to see their uneasy truce as they come to the realization that they were both there to stay and if they wanted to keep Lily, they'd have to deal with each other. This was a truly fun book, and if you're looking for a book with humor, heat and dogs then this is one for you.

Edited to add: Congratulations to Maureen -- today's Book-a-Day Giveaway winner!
Posted by The Long and the Short of It Reviews at 12:39 AM