Review: Baby on the Billionaire's Doorstep 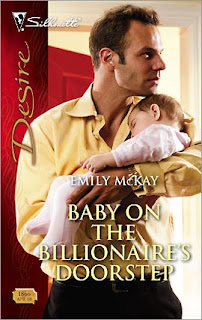 Baby on the Billionaire's Doorstep
by Emily McKay

Jet-setting bachelor Dex Messina thought he knew everything about women...until he met the tiny infant girl abandoned on his doorstep. One thing Dex was sure of: the gorgeous redhead who stormed back into his life, insisting she'd made a mistake, was hiding something. And uncovering her secret would be his pleasure.

To gain custody of her beloved niece, Lucy Alwin would do anything—even pose as the woman with whom Dex had shared one intimate night. But if boldly lying to the powerful billionaire was difficult, resisting their burning desire could prove impossible.

I have a confession to make: I think I'm in love with Dex Messina, the hero of "Baby on the Billionaire's Doorstep". And it's not because he's handsome, or rich or intelligent--though he is assuredly all of those things. It's because he's a wonderful father.

Oh, he didn't start out that way, to be sure. In fact, when he found a baby on his doorstep, he wanted nothing to do with her. But she wormed her sweet way into his heart, and transformed him.

I have to admit to being not quite so fond of our heroine, Lucy Alwin. I can sort of understand why she did what she did--lying to Dex about who she was. It's clear she didn't think things through, that she panicked and didn't consider the ramifications of her lie. But, I kept thinking that, had she just walked up to Dex and explained the situation, he would have been quite reasonable about it. Of course, then we wouldn't have had our story. And that would have been a shame, because Emily McKay has penned an entertaining one.

Dex responds quite admirably to the announcement that he's the father of a five-month-old daughter, the result of a one night stand. Oh, he goes through the gamut of emotions one would expect, but in the end, he's a man to admire. I loved watching his inept behavior, his worry, his fear...everything a new father must feel. And, his feelings toward Lucy were equally difficult for him, because he barely remembers spending the night with her (which, of course, he didn't).

Lucy isn't happy about the fact that she admires Dex. She imagined him to be arrogant, unfeeling and more. Yet, he steps into fatherhood shoes readily--much to her dismay. His determination to be a father really puts a kink in her plan to gain full custody of Izzie. Worse, she begins to admire him, to desire him, and to love him.

If you enjoy books with cute, though realistic, babies, handsome, successful men and loving, determined women, I think you'd be smart to grab yourself a copy of "Baby on the Billionaire's Doorstep".

Edited to add: Congratulations to Sue A. -- the winner of our daily drawing for the book!
Posted by Long and Short Reviews at 3:54 PM