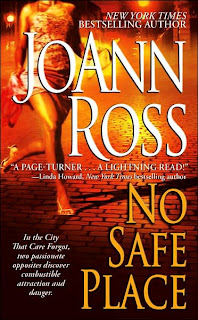 No Safe Place
by JoAnn Ross

Chicago homicide detective Kate Delaney fiercely defends victims. Which is why—despite death threats—she's testifying to a federal grand jury about local police corruption. It's also why she's infuriated by the New Orleans police department's blasé attitude toward her estranged sister's death. But pursuing an investigation in a strange city means allying with someone who knows the territory. And the players. Someone with a total disregard for the rules.

As an ex-cop from a police family, New Orleans PI Nick Broussard knows that cops live by their own code. You don't rat out a fellow officer. The last thing he needs is some smart-mouthed, by-the-book outsider unknowingly injecting herself into his undercover search for the truth. Even worse is the way she conjures up visions of tangled sheets...

Nick and Kate's chase pits them against the criminal underworld of the sultry southern city. And as they peel away layers of deadly deception, they discover a dark secret too many are willing to kill to keep.
No Safe Place takes the reader into post-Katrina New Orleans and plunges the reader into a world of voodoo, corruption, murder, and family secrets. Nick and Kate are polar opposites. Kate is a police officer who believes the law can be seen in black and white. Nick is an ex-cop, who was thrown off the force for corruption and who believes in the principal "whatever it takes to get the job done." And, when these two are thrown together, sparks fly.

Kate is convinced her twin sister did not commit suicide, like the police are claiming. Nick also knows there's more than meets the eye, but he wants Kate to stay out of things while he investigates. The many layers of suspense and mystery are slowly peeled away. Twists and turns abound. This reader could not put No Safe Place down. It is definitely a page turner.

The only thing that prevents me from giving this book a five is I found the beginning of the book confusing. There's an early chapter in Kate's sister's POV and it confused me a bit. But, even with that, I enjoyed the book immensely and found the ending completely satisfying.

Edited to add: Congratulations to Cathy M. Today's winner of the Book-a-Day Giveaway!
Posted by The Long and the Short of It Reviews at 8:29 PM