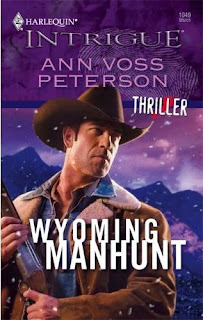 Cop turned rancher Jace Lantry had no idea how Shanna Clarke — a seemingly law-abiding single mother — ended up on the run from a rifle-wielding boss hell-bent on killing her. But when Shanna came to him, desperate for help, one look in her emerald eyes and Jace was powerless to resist. As the manhunt across Wyoming intensified, the more Jace believed in Shanna's claims of being framed. The question was, why was she a target? Now with both of them being hunted, Jace knew the quiet future he desired was no longer possible thanks to the deadly repercussions of this tempting woman's past.

Wow. Seriously, just wow. I could NOT put this book down. It (quite literally) starts off with a bang, and never once slows down. I read it in one day--a unusual thing for me lately because my schedule is so crazy. But, I pushed everything else aside and dove right into this suspenseful tale.

Our heroine, Shanna, goes on a hunting trip with her boss thinking she was up for a promotion. Instead, he tries to kill her! She runs and finds help in an unlikely place: Jace Lantry's ranch. He catches her trying to steal his vehicle, hears her story and just doesn't know what to believe.

With realistic characters complete with flaws and doubts and problems, Ms. Voss has penned one of the best suspense novels I've read in some time. Admittedly, it's a bit light on the romance side, but if you like edge of your seat reading, you're going to love this.

When I say "light" on romance, it's only that it's not the focus of this novel. That's not to say it doesn't exist. There is obvious attraction between Shanna and Jace from the get-go, but they're just flat out too busy staying in one piece to do much about acting on it.

I have to admit to liking the fact they spent a lot of time talking and getting to know each other a bit before acting on their attraction. It was a refreshing change of pace from so many other romance novels these days. It made their HEA believable and heartfelt.

I can't say much about this story without giving anything away. I'll just say this: grab yourself a copy and hold on tight for one wild ride! You'll love every word.

Edited to add: Congratulations to Virginia - today's winner of the "Book-a-Day Giveaway"!
Posted by Long and Short Reviews at 8:32 PM