Review: Up In Flames 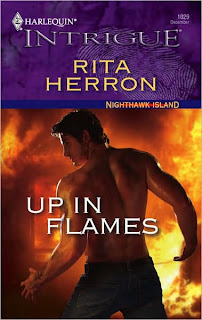 Up in Flames
by Rita Herron

A COLD CASE HEATING UP…

Southern summers were notoriously hot. But when a series of deadly fires blazed through the city, Detective Bradford Walsh really felt the heat. With temperatures rising, he had to catch the arsonist before the city was reduced to a pile of cinders.

AND AN ATTRACTION BURNING OUT OF CONTROL.

On the hunt for a killer, all roads led to one woman: Rosanna Redhill. The fires seemed to target the elusive beauty, and Bradford had to know why. But he couldn't let Rosanna's smoldering glances distract him from his investigation. Because then he'd have another fire to extinguish…one that threatened to send them both up in flames.

Up in Flames is a book with a lot to offer. It’s a spicy love story, a suspenseful mystery, and an eerie paranormal all wrapped up in one well-written novel. I was instantly drawn into the storyline with its sympathetic hero and heroine and appalling villain.

The heroine, Rosanna Redhill, is a complex character with a tragic past. She is vulnerable, even damaged in many ways, but she is still determined to be independent and resilient and I found her both appealing and believable. I especially liked that she was not the type to sit around waiting to be rescued; she does what she can to protect herself and even the hero when necessary.

The hero, Bradford Walsh is in many ways a classic two-fisted hero but with a modern edge. He too bears scars from a difficult past and it is this vulnerability and hidden pain that made him such an attractive character. I really liked that the author showed us the hero’s fallibility and his conflicted feelings about the heroine. He comes across as a three-dimensional character rather than just a muscle-bound stud.

The hero and heroine strike sparks from the very beginning and I was definitely rooting for them to get together. I also enjoyed the mystery and found it suspenseful without being at all predictable. The paranormal element lifted the plot out of the standard police procedural mode and led to some absorbing twists and turns. The only complaint I might make was that the author didn’t quite make the setting come alive for me.

Overall, though, I thought this was a very well done romantic suspense and I think anyone who enjoys a good love story packaged in a clever mystery will love Up in Flames.

EDITED TO ADD: Congratulations to CherieJ -- the winner of "Up In Flames"!
Posted by The Long and the Short of It Reviews at 6:36 PM