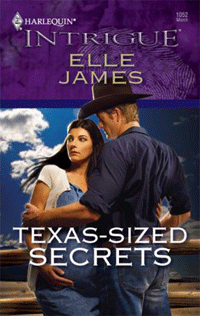 Lone Star Cowboys and secret babies. Only Texas is big enough to contain 'em both!

At five months pregnant, Mona Grainger was facing danger on all fronts. With cattle rustlers driving her ranch to ruin, she needed a man ready for long hours and hard work. Enter Reed Bryson, who could ride, rope, kiss...and certainly handle a gun.
His new boss may have depended on him more than she liked, but Reed wasn't hired to do her dirty work. She could do that herself. He was there to defend her land and cool down the hot-headed sheriff, whose advances threatened everything Mona held dear. Now the lone cowboy had more than his honor to uphold--he had a petite, pregnant powerhouse running his senses wild.

This story starts off with a bang and never slows down. It’s been a while since I’ve read a book from the intrigue line that kept me so completely captivated and off-balance. I read a lot, and love a good mystery—especially one that keeps me guessing like this one did. I felt sure I knew whodunit, then second-guessed myself, then went back, then changed my mind again.

I love the hero in this story. Reed is strong and caring and wounded. He’s a cowboy who loves his mother. He’ll protect whomever needs protecting with his last breath. He’s sexy and kind and respectful and has a fair share of smarts. And he’s crazy about Mona, our heroine, for lots of reasons.

Mona is stubborn and willful, and not always careful about her behavior. Considering she’s five months pregnant, this really frustrated me on occasion. Reed’s calm assurance is a good balance for her impetuousness, though I have to be honest and say that I would probably behave in much the same way as she did if I was in her shoes.

Poor Mona… anything and everything that could go wrong for her, does. Her father dies. She’s unexpectedly pregnant. Her cattle are being rustled. Foreclosure looms on the horizon. She can’t even trust the cowhands she has on her meager payroll. Her uncle wants the farm. The oil people want to buy the farm. The bank president has his eye on her property. Even the sheriff has designs on her.

This truly was one of the best romantic suspense books I’ve read. It kept me guessing, and allowed me to follow along as Reed and Mona discovered the clues. Their romance was believable, the mystery and the evil-doers were plausible. The only reason this only gets four books instead of five is that I found the coincidence of Reed’s paternity and Mona’s surprise child and the whole tangle behind that a little… well… coincidental. And in fiction, there should be no such thing.

All in all, a thoroughly enjoyable read that I gobbled up in a few satisfying bites. If you’re looking for a romance that’ll keep you on the edge of your seat, I can certainly recommend “Texas-Sized Secrets”.

Edited to add: Congratulations to today's winner: Maureen E.!
Posted by The Long and the Short of It Reviews at 7:00 PM