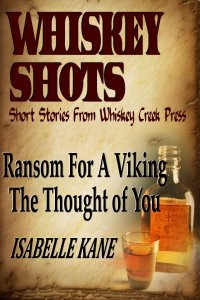 The Thought of You

Several months after the D-Day invasion of Normandy, Second Lieutenant Ruth Johnson of the Army Nurse Corps attends a British officers’ party. At first, saddened by memories of a lost fiancé, Ruth cannot get into the spirit of the evening. Then, a certain British officer captures her eye and fires her imagination. Where will the magic between them lead?

Ransom for a Viking

When she was a Viking slave, Astrid came to love Egil Wolfslayer, the young warrior who saved and protected her. But now he is the prisoner, and she is tending to him. Wounded and betrayed by his own brother, Egil faces the fight of his life to save himself and the woman he could never forget.

The two stories in this anthology are from vastly different eras. “The Thought of You” is set in the time of World War II while “Ransom for a Viking” is set around 740A.D. The settings are not too far apart. One is set in England and other in the Orkney Islands off the coast of Scotland.

“The Thought of You” has a familiar theme for a wartime love story. It is smoothly written and comfortable reading. While the war separates the lovers, there is no other real conflict. I felt like I’d read a beautiful beginning and ending to a love story. But felt I’d been denied the growth and development of their love. I wanted to read the love letters.

“Ransom for a Viking” is the longer of the two stories. Ms. Kane’s smooth writing propels the reader along into a world where pain, privation, power struggles, and prejudice are an accepted part of life. The protagonist, Astrid is a healer who has no real standing in either of the societies in which she has lived.

As the story unfolds, she and the man she feels is her soul-mate come together after being apart for a long time. Both Astrid and Egil know their love is the forever kind but do not know how to overcome the mores of that era so they can be together as man and wife. Astrid sets a confrontation in motion that decides whether she and Egil can be together or if she must become a slave to Egil’s cruel brother.

The harsh conditions and customs of that era are well depicted as the story works its way to a happy-ever-after.

Posted by The Long and the Short of It Reviews at 7:13 PM