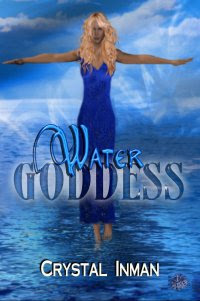 Every woman is a Goddess. Some simply don’t realize it yet. That’s when a Guardian arrives. She guides and protects. But most of all…she comes to set a woman’s inner goddess free. Because in a mortal’s strength is a Guardian’s salvation.

Erin Sanders is a school teacher with a past that has scarred her very soul. She is close to no one until a chance encounter turns her world upside down.

Daniel Rodriguez is a man who knows what he wants. He’s a serene soul who feels drawn to Erin through a brief meeting and vows to find out more about her.
But Erin has secrets that tear at her world.

Daniel doesn’t heed Erin’s words or warnings. He vows to gently open her eyes to a world she didn’t know existed. A world where a man will give anything to be in her heart.

Kendra is one of four sisters, Guardians who must each “save” a mortal in order to move up to the next level of power in their world. When Kendra, the Water Goddess, chooses Erin Sanders, she has her work cut out for her. Erin is an elementary school teacher who is wonderful with children but keeps to herself. She resists any chance for happiness with a man because of her background: as a victim of the foster care system, she was abused and taken advantage of and eventually had to fight her way to a new life. As a result, her soul is bruised, and she believes no one will love her.

When she meets Daniel Rodriguez, however, Erin’s determination to remain aloof is tested. Daniel, the owner of a bar and strip club, is a handsome, smooth-talking Spaniard who is immediately drawn to Erin. To be honest, the speed at which he falls in love with the distant schoolteacher was a little startling. Still, Daniel is charming and patient, and when he brings Erin home to meet his mother and many nieces and nephews, readers see the gentle, family-oriented man behind the handsome face.

When Erin meets Erica, Daniel’s eleven-year old niece, she intuits that something is wrong. Since Erin understands what it means to be “different,” she and Erica soon form a bond, and Erin is instrumental in uncovering the harm Erica is silently facing.

Through all of Erin’s personal growth, Kendra is there, encouraging her to take a chance with Daniel and accept herself for who she is, rather than who she was forced to become as a young teen. The idea of a “guardian angel,” which is really what Kendra is, is a charming twist on this story of injured-woman-learning-to-love-again.

I did find the climax a bit sudden and jarring, when Kendra and Erin switch places so that Erin can discover her own internal power. It is told in dream sequence and is a little difficult to follow. However, I thought the overall effect, of Erin finally taking control of her life, still worked.

The characters in Water Goddess are well developed, and readers will find Daniel a charming and convincing hero. The friendship between Kendra and Erin is fun and believable and moves the plot along. However, it’s doubtful that any elementary school would allow a new hire to wander the halls of the school unattended, or that a single teacher would have access to building keys and/or the alarm code, in today’s high-security world. The only other plot point I took issue with was the fact that all the “bad men” in this story commit the same crime. There are many ways that men can harmfully exert their power, and it would have provided interesting complexity if the author had explored some of them.

Overall, however, Water Goddess is a well-written, engaging story. Readers will enjoy the female friendship that triumphs over life’s ills, as well as the love of a great man who heals a broken woman through tenderness and passion.

Posted by The Long and the Short of It Reviews at 4:06 PM