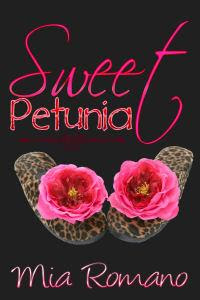 I can’t wait for you to read about the big adventure Ritzy and I went on this past summer. The cruise ship was a new experience for me. Let me tell you, I didn’t think I’d ever set foot on land again!

What started out as a vacation ended up being everything but. Ritzy learned a thing or two about love, and I learned it was never too late to follow my dreams. We made these little discoveries after nearly losing our lives!

And who would have guessed Ritzy likes a little kink in the bedroom. Just don’t tell her I told you that little tidbit of information if you see her out and about.

Sweet Petunia was the most fun I've had reading a book in a long time. Every chapter had a surprise, or a twist or a revelation that kept me wanting to read more and more. Have you ever read a summary like the above written by a secondary character? You have now. I found Mia's choice of style quite different and a breath of fresh air. Actually, most of this story, even how the chapters are set up, is clever and effective.

Even the delivery of the book was unique to me. It is told in first person POV, from the perspective of Ritzy. Yet, it shifts POV at times, but not really. I can't explain it but it works perfectly.

Ritzy is the heroine in this story. She has a dark secret that she wants to reveal on this cruise to her bestest friend in the whole wide world. She also has control issues and is looking for love but doesn't realize it. Ritzy is also the level headed one yet she finds herself getting into more mischief than she ever did in her life. I enjoyed watching her deal with things.

Sweet Petunia, and yes that's her real name, knows just what Ritzy needs and something else that Ritzy needs but who has no idea about. Petunia doesn't really want to tell her either - but things happen that force the issue. Sure that sounds ominous but it's balanced with Petunia's propensity for klutziness. You will laugh at some of the things that happen. Just you wait until you get to the mentioning of the 'fork incident'. If I'd been drinking anything at the time I read it, I would have spewed all over my PC screen.

If you think Petunia's antics are funny, then you haven't read about James yet. James is the mystery man that really pushes the plot along with all sorts of twists and turns. Who is he really? What does he actually do for a living? And Oh My Gosh! Is that what I think it is? Seriously, these thoughts ping-ponged in my brain as I was reading this story. And the great thing? He's just as much of a klutz as Petunia is. The scene in the cabin had me in stitches. Then there is this scene that makes me wonder if he truly is as Petunia paints him to be. I found it quite entertaining as Ritzy tried to figure James out. You see, his pursuit of Ritzy is warped by his job and he totally goofs it all up. Poor guy.

When you find out who is who and why what is what, you'll be amazed. Mia did a great job of packing an incredible amount of characterization, laughter, suspense and emotional truth in such a small amount of pages. The ending had me grinning from ear to ear with a happily ever after that is reminiscent of a combination of Mel Brooks and Joan Wilder. Truly a masterful work of literary romantic art.

I certainly hope that Petunia's story comes out soon as promised at the end of this book because I'm hooked. Will Petunia ever find her Elvis?

Posted by Long and Short Reviews at 12:55 AM