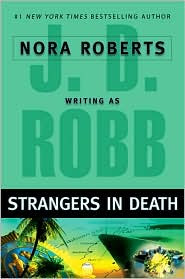 Strangers In Death
by J.D. Robb

Technology may be different in 2060 New York, yet the city is still a place of many cultures and great divides. But as ever, some murders receive more attention than others-especially those in which the victim is a prominent businessman, found in his Park Avenue apartment, tied to the bed-and strangled-with cords of black velvet.

It doesn't surprise Lieutenant Eve Dallas that Thomas Anders's scandalous death is a source of titillation and speculation to the public-and of humiliation to his family. But while people in the city are talking about it, those close to Anders aren't so anxious to do the same. With some help from her billionaire husband, Roarke, Eve's soon knocking on doors-or barging through them-to find answers.

But the facts don't add up. Physical evidence suggests that the victim didn't struggle. The security breach in the apartment indicates that the killer was someone known to the family, but everyone's alibi checks out. Was this a crime of passion in a kinky game gone wrong-or a meticulously planned execution? It's up to Dallas to solve a case in which strangers may be connected in unexpected, and deadly, ways.

I admit to getting a little giddy when I was offered this book to review. I love this series, and am thus predisposed to enjoy it. Fact is, though, despite my predisposition, I have very high expectations from the author on these books mainly because I do have so much invested in the people who populate the In Death pages, and by golly, she’d better deliver.

We enter the year 2060 and step into what seems to be a sexual encounter gone wrong. Lieutenant Eve Dallas, however, isn’t so easily fooled and picks apart the scene with great care. This was no accident…it was murder.

As always, though, the murder investigation is only one part of this wonderful book. We get to revisit so many old friends (though, I have to admit that the focus was clearly on Eve and Roarke this time and the secondary characters were very much secondary) and see the changes in their lives.

I love how the author manages to make this series very much a romance every time, despite the fact that Eve and Roarke are married and supposedly deep into their Happy Ever After. With each installment, she picks something in their relationship that is weak or painful, and draws it out so that it becomes integral to the plot and important to resolve. We get a new HEA with each book, and it’s very emotionally satisfying.

Better, I love to watch the mystery of the murder slowly unfold and feel as though I’m figuring it our right along with our heroine. I never feel led or worse, misled, by the writing.

I zipped through this book in only two or three large gulps—and am willing to bet that you will, too. However, if you haven’t read the books prior to this one, you should because you’ll miss out on so much if you don’t. The In Death series books could technically stand alone, but are far richer when read together.

Posted by The Long and the Short of It Reviews at 3:35 PM