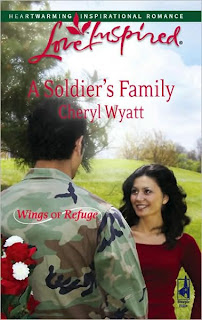 A Soldier’s Family
By Cheryl Wyatt

On A Crash Course With Love

She was the woman of pararescue jumper Manny Pena's dreams. But he'd stuck his foot in his mouth the last time he met Celia Munoz. Now, grounded after a parachuting accident, he was desperate to make amends with the beautiful widow.

But Celia wasn't having it. The last thing she needed was another man with a dangerous job—even if he had given his life to God.

Yet Manny's growing commitment to her and her troubled son began to convince her that perhaps she should take her own leap of faith.

Cheryl Wyatt’s second book in her Wings of Refuge series is powerful, emotional and intense. It is a gritty, honest look into the pain and suffering of a physical disability.

When Airman Manny Pena is grounded after a severe parachuting accident, he struggles with his new faith to trust God with his future. He fights his fears and the temptations of his past with a realness that is as heartbreaking as it is refreshing. His strength and courage hide the extreme softie lurking inside. Manny is a character that will walk off the pages and utterly captivate and charm you.

Celia Munez was the perfect heroine for Manny. Strong, beautiful and witty with a quick tongue and even quicker temper, she is a vivacious, colorful and passionate woman. She had already paid the ultimate price of loving a man with a dangerous job and is determined to never walk that path again. She hides deep hurts from the past and struggles against her fears of the future. Both these characters must learn how to forgive and be forgiven as well as accepting God’s peace and will for their lives.

I like books with sizzle and this one has a definite sizzle factor. There is a connection and chemistry between the characters that spatters off the pages. Cheryl Wyatt has once again crafted a story that will draw readers in with the first sentence and keep them engaged until the last word. I highly recommend this book, and this series, to anyone with a desire to laugh, love and grow in their faith.

Posted by The Long and the Short of It Reviews at 9:29 PM