Review: Shadow On the Moon 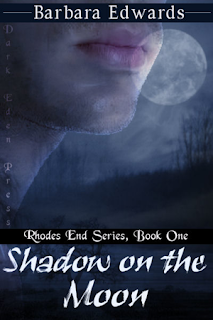 Shadow on the Moon
Rhodes End Series, Book One
by Barbara Edwards

In SHADOW ON THE MOON, Police Officer ‘Mel’ Petersen investigates a death only she believes is murder. By disobeying direct orders from the Rhodes End Chief, she risks her career to follow clues that twist in circles to her backyard and lead the killer to her.

Her neighbor Stephen Zoriak is a prime suspect. Steve worked for a major pharmaceutical company where he discovered a weapon so dangerous he destroys the research. He is exposed to a dangerous organism. He suspects he is the killer and agrees to help her find the truth when another corpse is discovered.

More deaths happen. Mel is injured confronting the suspect. A small group of Mel’s friends band together to hunt the killer.

In the course of their investigation Mel and Steve find the real killer and a love that defies death.

Small-town police don’t like newsworthy crime. But Officer Mel Petersen doesn’t believe in giving in to pressure when all the clues point to a real murder. Especially when one killing turns into two, and it begins to look like a serial killer is on the loose in Rhodes End. It doesn’t help that she finds the prime suspect charming and sexy.

Doctor Stephen Zoriak has secrets of his own. A bio-genetic lab accident has altered him at the cellular level, and he’s the first to suspect himself when the murders in Rhodes End take on a macabre twist. To complicate matters, he’s the only one who understands the problem, or can hope to stop himself.

But there’s another threat lurking in the darkness. Both Officer Petersen and Doctor Zoriak feel watched and threatened. If Mel and Stephen can’t find the hidden lurker, nothing will protect the helpless citizens of Rhodes End from the ageless monster unleashed on the sleepy town.

Barbara Edwards paints a wonderful picture of small-town politics and friendships, of mistrust of strangers and implicit faith in long-time neighbors. Her characters are well-developed and vividly presented. They jump off the page and animate her fictional world so well that the reader is pulled into their life and remains in the town of Rhodes End long after the books is finished.

The setting, rich in sensual input, adds to the tense atmosphere of the story. We feel what the characters are feeling, more so as the emotions are skillfully understated, and Mel’s exhaustion from several double-shifts affects her judgment and her reactions.

It is a very pleasant, very engrossing read. The reason why it only rates 3 1/2 books is that the plot wasn’t tied neatly enough to my satisfaction. While the reader wasn’t left wondering how the story ends, there were enough details introduced in the narrative to interweave all three storylines in a more tight and compact manner for a dramatic climax that would nevertheless leave an opening for more episodes in the Rhodes End series.

Still, it is a promising debut, and an author worth looking out for.

Posted by The Long and the Short of It Reviews at 3:33 AM