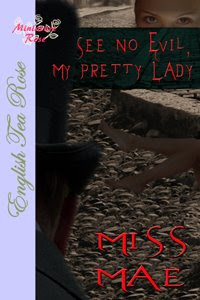 See No Evil, My Pretty Lady
by Miss Mae

New maid Dorcy Edwards spurns her wealthy employer's attempts to seduce her. When he becomes a victim of the person the newspapers call "Jack the Ripper," estranged son Gareth Davenport returns to London to handle his father's affairs. Dorcy puzzles over what the brooding, handsome heir might be hiding behind his eye patch and black leather gloves. As circumstances unfold to expose the killer's identity, Dorcy's plunged into a nightmare, convinced Gareth is none other than the infamous murderer. But is Dorcy's life what Gareth seeks? Or nothing more easily broken than her heart?

Loved it! This story is a must read. There is action from the first sentence to the very end. The main character Dorcy displays proper genteel Victorian actions, thoughts and words. Although there are glimpses of a smoldering fire within as she connects with Gareth Davenport, her murdered employers son. She can get the “vapors” and faint as a proper lady should but at other times she manages to be strong enough to fight off attackers.

The mystery is tied in time and place with the story of “Jack the Ripper”. With all the characters assembled on a small deserted island, in accordance with the senior Mr. Davenports will, the pace of the story quickens. Murderous events continue to happen so quickly that the characters constantly form alliances within themselves. Then those are tested and found lacking and other alliances are formed. Everyone at some point becomes suspected of being “Jack”. The action is not static and the reader may decide who is the real culprit only to find a few minutes later that their presumption is wrong.

Throughout the story London’s famous fog, damp and wet, swirls around characters. Darcy escapes an attacker by vanishing into the fog within the first paragraph. On the island the fog continues setting the scene lifting only occasionally to reveal or hide the murderer or an object. Great setting, very plausible characters, and rapidly changing action make for a good read.

Posted by The Long and the Short of It Reviews at 3:34 AM