Review: Oh Brother, You're Not My Keeper 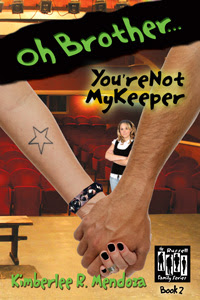 Oh Brother, You're Not My Keeper
by Kimberlee Mendoza

Being a teenager is hard enough without a sister trying to control one's life.

Sixteen year old Nick Russell falls in love with high school outcast Sherry Park. After losing her in a tragic car accident, he decides to never love again. But when an unlikely foe captures his heart, he begins to change his mind. When his sister Melena finds out her brother is hanging out with her professor's wild child, she puts on the brakes. Can Nick find happiness despite his sister's encumbering efforts? Will his heart ever heal?

This is the second book in the Russell Family Series by Kimberlee Mendoza. I didn't have the privilege of reading the first one in the series, but you can bet I'll be looking it up.

Why? because this one was so compelling!

Mendoza has clearly mastered the art of a well executed plot. She launches the book with an unlikely but very sweet and successful romance between two very dissimilar teens - a lithe and popular surfer and an obese brainiac. Their relationship develops gently and believably and is spiced with the ugly, but expected opposition from their classmates. As each conflict arose, it was a real treat to see Nick and Sherry rise to the occasion and triumph, even though they were left with some painful scars. I had a clear expectation that they would follow through, get engaged and eventually be accepted by all.

Mendoza threw in a shocking plot twist in the form of a tragedy. I was so lost in the story that I actually grieved and couldn't read any more for a few days!

When I finally returned to the book, I found Nick going through a painful grieving process and his older sister trying to mother (aka "smother") him. Would Nick recover?

Would he suddenly go off the deep end and do something foolish? Or would he continue walking with God and realize that life could go on? Would he find joy again?

He did find joy again, but it was in the most unexpected way…

The only flaw I saw in this tale was that sometimes Nick and his friends seemed just a tad "older" than their years - and certainly much more autonomous than my own overprotected small town teens. But hey, he lives in suburban California and maybe they grow up quicker there!

Ah...and I was left with one nagging question: How did he and his whole family AND his girlfriend get last minute plane tickets to Hawaii? Fortunately, that little detail didn't mar the beauty and drama of the story in the least.

So, I highly recommend this book. It's one that will keep you awake wondering what will happen next.

Now where can I get book #3 so I can find out what happens to Nick's younger sister?????

Posted by The Long and the Short of It Reviews at 1:25 AM