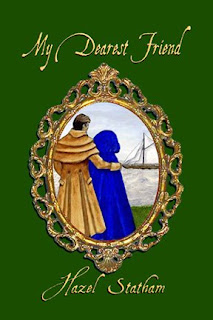 My Dearest Friend
by Hazel Stratham

Devastated and wracked with guilt by the death of his younger brother, Stefan, in the Peninsular War, Robert Blake, Duke of Lear, readily agrees to aid Jane Chandler to bring her seriously wounded brother back from Portugal.

Much against Jane’s wishes, he decides to accompany her and together they embark on the hazardous mission to retrieve the young soldier. However, the journey holds many revelations, not least of all the abiding friendship and growing love between the two travelers.

That special love is put severely to the test by the treachery that awaits them upon their return to England, when a tenant of Jane’s former home invades their lives, maliciously creating jealousy and misunderstandings for his own nefarious reasons.

Can their friendship and love conquer the emotions that threaten to tear them asunder?

My Dearest Friend is an historic romance in an unusual but undoubtedly moving style.

Ms. Stratham indulges in the gushingly dramatic at times, not just leaning toward but splashing heavily into precious sentiment. And indeed, it is an indulgence; in a time when storylines are king and 'fast-paced' is promised in so many, it is almost a luxurious change to sit and savor this tale.

Friendship, trust and mistrust, and finally love fill these pages, and we all wallow in every emotion. The wealth of those emotions is hard to explain; as compared to more common descriptions, it is the difference between a ginger snap and a double chocolate brownie, and the word choice is often every bit as rich. The occasional lengthy, complex sentence might be found as detrimental; However, those sentences remind us to savor; to pause and feel a chill, or imagine those strong arms about you.

Tension is palapable as the action begins in a gambling den, London, 1812. Robert, the duke, seems to have all the cards in his favor - yet we are soon to learn, his motivations are far deeper, and grim. Upon meeting the petite and quite fashinably turned out Jane chandler, he is motivated to become the good Samaritan. Yet, it seems he will take not take personal involvement; and we wonder how the two shall ever meet again. Their next meeting is not by chance, however. The duke shakes off his inner darkness, in spite of himself, and in spite of recalling a betrayal. Their journey over both land and sea brings them into closer aquaintance, but is full of challenges.

The conflicts, communications issues, (how frustrating some of the decorum of the day, when we long for the two to share their meanings more clearly!) the depths of the characters and so much more will keep you reading this romance. Plausible dialogue make the characters, no matter how dramatic, believable. The small details of nineteenth century life, from background objects to the central codes of behavior and honor, add a depth that parallels nicely with the inner lives of the main characters. I loved that he drove the man's man of a vehicle - a curricle - at "breakneck speed."

Jane is to be found in her aunt's drawing room composing letters. Carriages, homes and ships come as sharplyinto focus as do the characters; just imagine the busy deck of a ship preparing to sail, or a young woman being shown along the companionway to her cabin. I will without doubt indulge myself in another read of this warm and enriching romance.

Posted by The Long and the Short of It Reviews at 4:19 PM