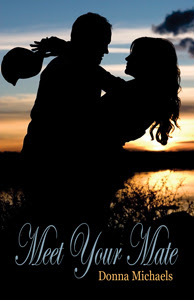 Meet Your Mate
by Donna Michaels

Ex-Army Ranger Capt. Jack ‘Dodger’ Anderson would rather run naked through a minefield in the Afghan desert than participate in a reality television show, but when his brother Matthew begins to receive threats, Jack quickly becomes Matthew’s shadow. As if the investigation isn’t baffling enough, he has to contend with the addition of a beautiful and vaguely familiar new contestant.

Security specialist, Brielle Chapman reluctantly agrees to help her uncle by going undercover as a contestant on the Meet Your Mate reality show. Having nearly failed on a similar assignment, she wants to prove she still has a future in this business. But when the brother of the groom turns out to be Dodger, the object of her secret desire from an embarrassing prior undercover case, her job becomes harder. Does he recognize her? And how can she investigate with their sizzling attraction fogging her brain? Determined to finish the job, she brings the case to a surprising climax, uncovers the culprit and meets her own mate.

With all of the reality shows on television these days, this storyline is pretty topical, and sparked my interest to see how the author might glean a distinctive romance from this current trend. I have to say, Donna Michaels did it pretty well.

Brielle accepts the job as an under-cover contestant on the reality show "Meet Your Mate" only because of her love and respect for her uncle, and well, because he guilts her into it. Even though the job reminds her of a recent mistake with a man she'd rather forget, her concession to her uncle makes her an appealing heroine. Her strength and abilities — intellectual as well as physical — further enhance her character.

Jack is portrayed as a hunky alpha-man; capable, gorgeous and brooding. He hasn't had much luck with women and his most recent failure has caused him to develop serious trust issues.

Brielle and Jack have instant chemistry, but due to circumstances, secrets that must be kept, and their own individual demons, they each feel the need to fight the attraction, both for outward appearances and their heart's protection. During the encounters when they both let their guards down, the expression of their mutual attraction is sensually conveyed with a touch, a look, or a carnal thought and never failed to quicken my pulse. The constant inner and outer conflicts keep the tension high and the reader wanting to know what will happen next.

There is a big twist at the end that is a bit far-fetched in how they get there, but the end result is amusing so it didn't detract from my enjoyment of the story — one of those rare situations where an end-justifies-the-means scenario works for me. This is a unique romance using a timely cultural phenomenon for a setting, and I think you will enjoy its distinguishing charm.

Posted by The Long and the Short of It Reviews at 12:53 AM