Review: The Madness of Celia Summers 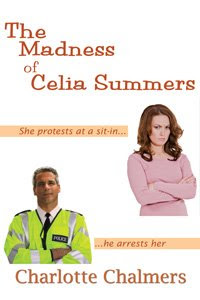 The Madness of Celia Summers by Charlotte Chalmers

Celia Summers, intrepid mother of two, loves her work as an art therapist. She’s proud that she gives her elderly independents something to look forward to each day, even if her partner, Martin, is disparaging of her efforts.

But then Martin has a secret agenda Celia knows nothing about. Meanwhile she defends her geriatric charges, fights to secure gallery space for their artwork, and fights to keep The Harbour, a home the residents can truly call home, from being closed. She takes on the might of the town council; to the point of leaping from a church steeple to bring attention to the plight of her independents, no matter that she might fall and end up splattered all over the pavement. When she does fall, however, it’s much more painfully.

Police Constable Alex Burrows, the son of long time Harbour resident, Colonel Burrows, whose sense of humour has made her laugh, whose tragic personal circumstances have made her cry, whose smile has stolen her heart; turns out to be just as much a liar as Martin. Can Celia ever trust again? Can Alex get past her protective family of friends, forgotten by most of the people in their own lives, and convince her to trust him, to love him, as he does her?

I have to say right off it's been a long time since I've laughed out loud while reading a book, but Charlotte Chalmers has introduced a cast of characters you will love to get to know.

Celia Summers is the single mother of two, living with Martin, her partner and the father of her younger son. She's also an art therapist at a retirement home which is danger of being shut down. Celia makes it her aim to stop the Harbour from being shut down and her friends from losing their homes, much to the embarrassment of Martin, who describes Celia's work as "a bit of a part-time thing...A bit of a hobby, teaching them to paint wonky sunflowers."

The Harbour is filled with eccentric and charming people: Colonel Burrows, who sculpts when he's not chasing the women at the home with a glint in his eye; Eleanor Simpson, painter and elegance personified who finds Colonel Burrows' manner a little too condescending...or does she?; and, my personal favorite, May Binton, who loves to run barefoot and is a wonderful ditzy woman...with all the wisdom that comes with simplicity.

Colonel Burrow's son Alex comes on the picture and proceeds to complicate Celia's life. The interaction between Celia and Alex, and indeed Celia and Martin, makes The Madness of Celia Summers a page-turner. Add in a bit of mystery and a strong dose of the funnies, and you have a very satisfying read which I highly recommend.

Note: A copy of this eBook is being given away in this weeks author spotlight. Earn an extra entry into the contest by commenting on this blog post between March 24 - March 28, 2008. Drawing will be held March 29, 2008.

NOTE: If you have a private Blogger profile or a profile with no email address available, you must include an email in your entry -- this is how we inform the winner. If we are unable to locate an email for you, you're ineligible to win this prize. Thanks!
Posted by Long and Short Reviews at 6:00 AM