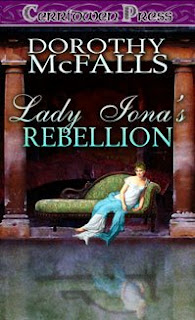 When pressured into accepting a husband of her father's choosing, Lady Iona seeks out the notorious rake Lord Nathan Wynter for his help in learning how to stand up for herself.

While Iona is looking for adventure, Lord Nathan is doing his honest best to reform his ways in order to repair his reputation and his disastrous relationship with his family. Winning the very proper Lady Iona for a wife would go a long way to achieving that end.

However, the more he tries to protect Lady Iona from running headlong into disgrace, the more he grows to admire her daring spirit and unpredictable antics. Instead of returning her to the obedient world in which she was raised, he encourages her blossoming passions. Such a move is surely going to lead them both to ruin. But for love he is willing to risk everything.

Lady Iona would make a perfect wife: well-mannered, obedient, with perfect taste and poise--except she doesn’t want a husband, and when her father imposes his choice on her, she rebels for the first time in her entire life.

Lord Nathan Wynter is the last man any well-bred lady would chose for a husband. A reputed rake and despoiler of virtue, his own family barely acknowledges him.
And yet, it would seem the former close friends are the only people who can help each other, and may even have a chance to forge a future together. If they can break through the barriers society has erected between them.

Dorothy McFalls has a very nice Regency voice and uses it to good purpose to relate the tale of these unlikely lovers. In spite of an occasional lapse into more modern rhythms, which prevents me from bestowing 5 Books on her work, the author weaves a charming tapestry of intrigue and innuendo, colorful balls and discreet parlors. Her characters are vivid and unforgettable. The settings are bright and easy to picture. The reader is invited to share rides in horse-drawn carriages with the characters, down to the comfort – or the discomfort – of a given conveyance.

The author has a gift for descriptions that illumine the period of the story and define the characters’ interest in clothes and other items of everyday life, and highlight the importance of such details – and conversely, the unimportance of other aspects of their lives.

Let’s not forget the story itself. It kept me enthralled from beginning to end, and the conclusion did not disappoint me. It was a light and pleasant read, and utterly satisfying. Dorothy McFalls truly recreated a believable Regency England, invited her reader into her world, and the reader there until the end.

As it should be with a fully satisfying novel, reaching the last word was bittersweet: the satisfaction of knowing the conclusion was mixed with the sad necessity to leave a well-built world and extremely likable characters.

Posted by The Long and the Short of It Reviews at 5:43 PM