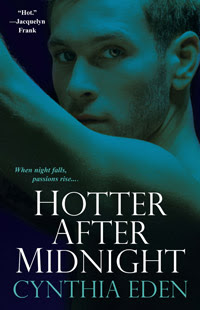 Hotter After Midnight
by Cynthia Eden

Emily Drake is a psychologist with a very special talent—thanks to her empathic power, she can touch the thoughts and emotions of her patients. And Emily’s patients, well, they aren’t exactly typical either; they’re Other—vampires, demons, all of the creatures that humans fear in the darkness of the night

When one of the Other starts killing humans, Emily is pulled into the investigation. Colin Gyth, the lead detective on the case, doesn’t trust her, and, since Emily senses he’s a Shifter, a being born with the ability to transform into an animal, the feeling is pretty mutual. Never trust anything born with two faces … that was Emily’s motto. However, she and Colin are forced to put aside their misgivings and work together once Emily officially joins the investigation as a profiler.

While Emily and Colin search to unmask the killer, an unexpected passion grows between them. Burned in the past by those he’d trusted, Colin had never thought he’d let a woman get to close to him again, especially a woman with a dangerous power like Emily’s. Yet he finds that he can’t resist her. There’s something about the reserved Doctor Drake that calls to him, and the beast within the man recognizes his mate. But when the killer sets his sights on Emily, Colin will have to risk his life in order to protect the woman he craves more than anything else, and Emily will have to use her gift to look into the very heart of evil in order to defeat the monster hiding in the shadows.

The paranormal market has grown in a huge way, to the point it’s difficult to decide what to buy and whether or not take a chance on a new-to-you author, when there are so many really good established ones in the genre.

My advice? If you haven't alread, take a chance on Cynthia Eden. She’s a fresh new-to-me voice, and I have NO regrets in reading her book.

I have to warn you, though...this is not a light paranormal, it’s not funny or goofy (with the possible exception of a walk-on character in the form of a vampire who is blood-phobic). It’s dark and edgy and hot and suspenseful. We have serial killers and demons and vampires and shapeshifters and more. And you’re not going to be able to put it down. The story is interesting, exciting, and romantic.

Colin is a perfect tortured alpha hero. I was half in love with him from the moment we met. He’s smart and passionate and brave. And he has a secret—he’s an Other and not quite human, but no one knows and he likes it that way.

Well…no one knows until he meets Emily aka the Monster Doctor. She sees through him right away and he’s not pleased. But he has other things on his mind, like catching a serial killer who is an Other. An Other who seems to have targeted Emily.

Ms. Eden has done an amazing job with her characterizations. I knew these characters inside and out. I also have a deep and abiding hope that she’ll redeem one of the villains, a demon named Niol, and write his story. I loved him. And Brooks, another secondary character, definitely needs a book. Oh, wow… truly I was just caught up in the whole world.

The love story was deep, hot, intense and sincere. I really believed that Emily and Colin were reluctantly falling in love, that they were incredibly attracted and that despite all the reasons they shouldn't act on their feelings, it was inevitable.

If you’re looking for a crime drama/serial killer/paranormal that is HOT, then you need to pick up “Hotter After Midnight”. You won’t regret it. I’ll lay odds it’ll land firmly on your keeper shelf.

Posted by The Long and the Short of It Reviews at 12:48 AM