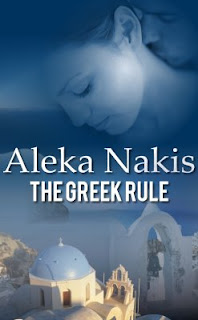 The Greek Rule
by by Aleka Nakis

Ambitious and beautiful Athena Lakis has one simple rule…

No romance with a Greek.

In theory, this tenet should be easy to keep. After all, reaching for her life long dream to own and operate a prestigious hotel on prime seaside property in Greece, she has her hands full. The major hurdle being her drop-dead gorgeous competition: Greek tycoon Alexandros Strintzaris.

Alexandros has his sights set on more than just a real estate deal. He wants Athena, and he always gets what he wants. When he discovers she is the one outbidding him on the resort, will he feel the same?

From a Naples ballroom, to the exotic island of Santorini, Alexandros and Athena learn when it comes to affairs of the heart, there are always exceptions to the rule.

The Greek Rule is not your typical Greek romance and yet it works so well. Typically the Greek hero is potrayed as a arrogant sometimes cruel man, but Alexandros is nothing of the sort. He is confident, handsome, and sexy without resorting to manhandling or cutting remarks.

The woman in these stories are usually weak-willed but again the author breaks the mold of the genre. The heroine Athena Lakis is a successful business woman with goals. Despite Athena's rule of no romances with Greeks, Alexandros knows he is the exception to the rule. He expertly wins her and with a hero as sexy as Alexandros, who can blame her? Certaintly not me, as I would have melted into his arms much earlier in the book.

A charming cast of secondary characters fill the book, giving the reader the flavor of Greek culture.

Review by Heather
Posted by The Long and the Short of It Reviews at 5:03 PM