Review: The Fourth Time's A Charm 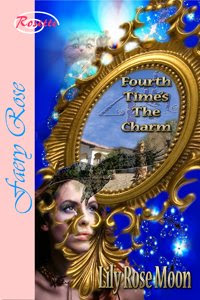 The Fourth times a Charm
by Lily Rose Moon

Rowena, the seventh daughter of a seventh daughter, is a young witch whose spells have a tendency to go awry. She is determined to find a successful invisibility spell to regain her self-respect and get back into the good graces of her local Counsel of the Craft, but when the spell goes awry for the third time, she accidentally turns her neighbor’s cat invisible. When her neighbor Michael comes looking for his cat an attraction flares between the two. Rowena is powerfully attracted to him but not overly optimistic about it; she hasn’t had much luck with relationships. When her reversal spell goes awry, things go from bad to worse. If Rowena finally fixes this situation (and she's not so sure she can), will Michael still want to be with her?

It's magical, it's funny, it's enchanting, light and very sweet. On a dreary day, take a cup of time and read this. My heart lightened and I felt so much better after reading this book.

A witch with respected lineage but rather inept herself manages to make her neighbors cat disappear. Rowena, the witch, is adorable as only a witch can be, Curly cinnamon colored hair with a great attitude. Trying to reverse the spell that accidentally "poofed" away the cat causes her to accidentally "poof" away her neighbor. Now there's another dilemma to try to reverse that spell.

Sweet, touching things happen like the heroine accidentally falling into Michael's arms causing that instant throb of sensuality. The plot action continued to bring out wonderful touching feelings for me. You'll need to read this to see the worst thing that happens! It tickled my funny bone. Nothing serious, just a lighthearted comedy, well written and the thing to read when you need a light sweet feeling.

Posted by The Long and the Short of It Reviews at 12:34 PM