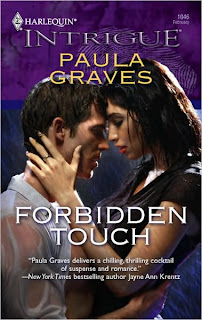 One touch was all it took for the gorgeous stranger to penetrate his soul.

He was a hardened former Marine with a guarded past…until one touch from Iris Browning became his undoing. Thanks to the raven-haired beauty, reclusive millionaire Maddox Heller found himself back in the line of fire, chasing down an elusive killer who’d made Iris his next target. She claimed not to know why, and every instinct told Maddox to believe her. Still, trusting this virtual stranger seemed risky, especially as their relationship grew increasingly personal. Now, as ghosts from the past threatened to destroy the present, would one forbidden touch bring pleasure…or pain?

Woo! This was the best book in the “Forbidden” series by Paula Graves. I was a little apprehensive after feeling a little let down by the second book, and actually put off reading this book for a while. I wish I hadn’t.

I admit to a particular affinity for the paranormal gift of empathy. It fascinates me. I think Ms. Graves handled her heroine’s ability fabulously and never forgot its existence. It was always there on the edges or right up front and it had to be because it was such a big part of Iris, not to mention the entire story.

When Iris Browning arrives in paradise for a long-awaited vacation with her college friend, Sandrine, she’s concerned. Sandrine isn’t at the airport to greet her, nor is she at the hotel. Iris immediately begins to search for her, especially when it becomes evident that the local police aren’t going to do anything.

She finds help in an apparent beach bum, Maddox “Mad Dog” Heller. He doesn’t plan on helping her, doesn’t know why he follows her from the dive where they met…but when she stumbles across a wounded woman and does something odd to help her, and then faints dead away, what else can he do but take care of her?

So… take one beautiful empath, add in a hunky former marine, throw in an entire convention of mystics, the CIA and a few terrorists. Mix well. This is the entertaining premise of “Forbidden Touch”.

Iris is sensual to the bone because of her gift. Maddox is just plain sexy and strong—the ideal alpha male, and the only one who seems to genuinely care about Iris and not just what she can do. He dogs her footsteps, much to the dismay of Iris and several others, just to make certain she stays in one piece. But he won’t get any closer than that. He doesn’t have any desire to care about a woman or have someone care deeply for him.

Of course, he doesn’t stand a chance of that, and Iris chips away at his defenses a little at a time. I really enjoyed these two. I loved their interactions, their fights, the sexual tension. Ms. Graves outdid herself on this book, and the only downside is that it’s the final book in the series.

I, for one, hope she’s hard at work on her next book. She’s become an auto-buy author for me. I can’t recommend the entire series, and this book in particular (they stand alone nicely), to anyone looking for a top notch romantic suspense.

Posted by The Long and the Short of It Reviews at 12:21 AM