Review: Doorway To the Stars 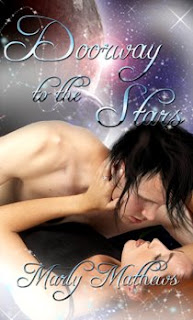 Doorway to the Stars
by Marly Mathews

Doorway to the Stars, tour guide, Freya Kirkland is a veteran of the last great war that was waged across Earth and its many planets that it has colonized. The new government has been in power for ten years now, and Freya is still struggling to come to terms with the strange new world Earth has become. Thrust back into an archaic age where slavery and other barbaric practices are now in use, she must fight just to get through another day.

Rumors of Outlanders that have infiltrated the star traveling system start to run rampant throughout Earth's many media outlets. Knowing that she must continue her job as a tour guide, she knowingly places herself in danger just so she can continue to earn her much needed paycheck. Her world is turned upside down when she meets Gaian Warrior, Aries D'Halen. Will their love be able to mend a broken world and lead her people and his people into a bright future for all?

"Doorway to the Stars," features a very original plot, which is obvious in the first sentences of Mathews' new futuristic romance. It is the year 3000, and tour guides escort people to unimaginable destinations. Mundane though her job as tour guide seems to her, Miss Freya continues to escort people to their off-world sexual adventures.

She does contemplate the opportunity to be a guide on a a space cruise ship, because everyone knows that being an an interplanetary tour guide, using the 'doorway' system, is not without risks. Still, she has financial obligations: Past events have left some of her family members in debt, and she is obliged to help financially. Although she seems unmoved by the sexual activities of her clients (and the natives,) and keeps a business like approach going, her attitude will change dramatically. A certain Outworlder, no mere native but of a species that claim to be superior to humans, reaches past her defenses. Vivacious Freya becomes a captive of the outworlder Aries D'Halen, and sparks fly immediately. Yet, that is merely the start. Interplanetary war threatens, and no ones lives will be easy.

Mathews has created a super, and hard to predict plot, and her characters are strong. Dialogue is especially fast-paced, and reveal much about characters, from sarcasm to vulnerability. The best parts of this are the powerfully sensual... and the less best involve the war, and some of the complexity of the story relating to the war. Doorway to the Stars is very readable, interesting, and original.

Posted by The Long and the Short of It Reviews at 3:31 AM