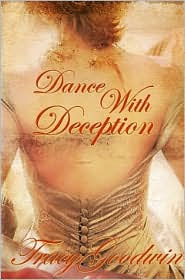 Dance with Deception
by Tracy Goodwin

Duty can be a curse. No one knows this better than Sebastian Montgomery, Ninth Duke of Davenport. Groomed at a young age to inherit his father's tarnished title, Sebastian has vowed never to fall in love or marry, certain that both lead to disaster. Gwendolyn MacAlistair longs for love; however her ruthless father has arranged for her to marry a man she despises. The very man who destroyed her family. Duty be damned, neither Sebastian nor Gwen can deny the fiery passion between them. Soon, they find themselves embroiled in a maze of family secrets and dangerous deceptions. Can love survive such a deadly dance?

Dance with Deception, a historical romance set in rural England in 1845, is the debut novel from author Tracy Goodwin. As suggested by the title, the novel’s theme is deception and the hero and heroine must confront truths hidden behind generations of lies, and discover how dishonesty can corrupt and lack of forgiveness can distort a personality. This is a plot then, which revolves more around emotional and psychological issues than action or suspense.

The spicy love story between Gwendolyn and her dashing duke definitely held my interest although sometimes I struggled to understand Gwendolyn’s reactions. Her feelings, especially as regards the duke’s actions did not always ring true for me; nor was her motivation always clear (for instance, would breaking an engagement that was never formally announced really ruin her reputation and disgrace her family?) There were also some minor historical irritants: Victorians writing letters on parchment (which went out of use in the Middle Ages) and wealthy nobles packing their own trunks and saddling their own horses, for example.

But overall, Dance with Deception was an engrossing read and should please anyone looking for an old-fashioned, emotion-filled romance.

Posted by The Long and the Short of It Reviews at 7:09 PM