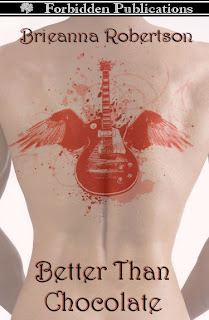 Better than Chocolate
by Brieanna Robertson

Years ago Van Marshall, lead singer and guitarist of the metal band Bleeding Passion, let the love of his life get away because he lacked the courage to tell her how he felt about her. He has been plagued by the memory of her ever since then, unable to fully commit to another because of the love he still held for her in his heart. Now, she is thrown unexpectedly back into his life, bringing with her all of the feelings he has hidden inside for so long.

Because of a brutal assault, Kat Vauss hates men and trusts no one. She is a martial arts master and devotes all of her time to her work and her training. The only person to ever come close to her heart was a shy, awkward boy she knew in high school who she thinks is gone forever.

When Kat is given an assignment to shoot a DVD for Bleeding Passion, she is not prepared for the way her body and heart react to the sensual singer, who coincidentally helped her out of a sticky situation some years before. His presence stirs to life dormant feelings inside of her, but will she realize that all men are not evil, and life can still be beautiful and worth living?

Better than Chocolate by Brieanna Robertson is an intriguing story that turns the traditional romance novel blueprint on its head. Instead of an alpha male hero we have Van, a sensitive poet/musician who’s prone to paralyzing anxiety attacks. And instead of a demure heroine, we have Kat, a tough martial artist who never hesitates to roundhouse-kick first and ask questions later. But it’s when they meet that we realize each is in need of rescue and each has been empty since losing track of the other as teenagers.

I truly enjoyed the story of Kat and Van rediscovering their love and it was fun to see the romance play out against the backdrop of the metal band’s cross-country tour. Especially since the tour has some humorous moments as the band deals with incompetent drivers, bus breakdowns and charter flights gone wrong. But throughout, the focus is on romance as Van tries to find the loving, vibrant Kat he used to know behind the brittle, wary façade she wears now. I also appreciated how candid the novel was in its portrayal of both Van’s anxiety disorder and Kat’s emotional scars from her brutal past.

Unfortunately, I thought the romance resolved a little too soon, leaving the second half of the novel with scant suspense, and I thought the story too often used pop culture references to convey emotion. But since the author acknowledges that Viva La Bam and HIM helped her through writer’s block, perhaps it’s not surprising that both are mentioned throughout the story. I had never heard of Bam Margera or the band HIM, which leads me to think that this novel is meant for a younger audience. So if you like stories where much of the dialogue begins with “Dude!” and love means getting a new tattoo, you will find Better than Chocolate a sweet treat.

Posted by The Long and the Short of It Reviews at 3:29 AM