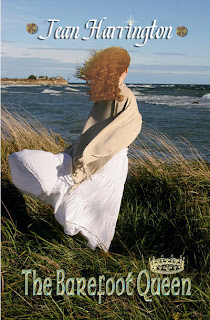 The Barefoot Queen
by Jean Harrington

Following in the footsteps of her pirate great-grandmother, Grace O'Malley takes matters into her own hands, risking her love…her life.

Owen O'Donnell views the 'Deer Stalker' as a Robin Hood to the starving villagers. Only, Lord Rushmount has vowed to stop the poacher one way or another. As suspicions grow, Owen fears he won't be able to keep Grace from harm's way.

Grace knows the perils facing them all, but cannot pull back in this most dangerous game…maddening one man…thrilling another.

“The Barefoot Queen” is the story of Grace O'Malley, the daughter of an Irish tenant farmer and the great-granddaughter of a female pirate. She is fiercely loyal, passionate and outspoken, all qualities that are a bit unusual for a young peasant lass in 1665. When her father is wrongfully punished for trying to provide food for the oppressed people of Ballybanree, Grace takes over his cause but with dire consequences for her family when the truth eventually comes out.

Although her beauty and spirit attract the attention of numerous young males, including the corrupt (and married) English Lord Rushmount, Grace only has eyes for one man. Owen O'Donnell is also strong willed and independent, the only one willing to stand up for himself and the people of Ballybanree. However, Owen sees himself as unfit to be a husband and pushes Grace away. Will Grace and Owen get past their independence and find a way to be together? Or will she marry someone else out of desperation because Owen is too stubborn to take a chance on love?

I absolutely could not put this book down! It's been ages since a book made me laugh, cry, and run through the entire gamut of emotions. I rooted for the heroine, cursed at the evil deeds of the English lord, and gasped with shock when the unthinkable happened. The author did an absolutely spectacular job of bringing 1665 Ireland alive with vivid descriptions and a historically accurate portrayal of class divisions. I will warn you, however, that the story was quite graphic in a few areas. This only added to its believability because tenant farming in the 1600s was basically indentured servitude. This definitely earns a place on my keeper shelf!

Best of all there will be a sequel to this book in 2008 with “In the Lion's Mouth.” I can hardly wait for Grace's newest adventure!

Posted by The Long and the Short of It Reviews at 4:23 PM