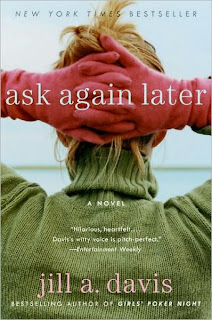 Emily has a tendency to live with one foot out the door. When her mother dramatically announces, “They’ve found a lump,” Emily gladly leaves behind her career, her boyfriend, and those pesky unanswerable questions about who she is and what she’s doing with her life to be by her mother’s side. But back in her childhood bedroom, Emily realizes that she hasn’t run fast or far enough – especially when she opens the door, quite literally, to find her past staring her in the face.

Ms. Davis, an Emmy-nominated writer for Late Show with David Letterman and the author of the best-selling novel Girls’ Poker Night, pens this story about a thirty-one year-old woman at a crossroads. While I expected the novel to focus on the relationship between mother and daughter, it is a much lighter work that falls into the “chick lit” genre. Emily Rhode quits her job as a lawyer when her mother is diagnosed with breast cancer, and she spends most of the book trying to sort out her relationship with both her mother, a distracted, superficial woman, and her father, who abandoned the family when Emily was five years old.

In traditional chick lit manner, the first-person narrator is single, living in New York City, and struggling to find a man with whom she can have a healthy relationship. Emily has a ho-hum job and a gay best friend in whom she confides. However, sorting out the mess of her childhood, and coming to terms with her parents and their flaws, soon becomes the most important order of business. While the author does try to examine the serious nature of family relations, and the ways in which illness and death wreak havoc our own views of mortality, unfortunately the novel never really rises above the self-absorption of the main character.

With this novel’s resemblance to Anna Quindlen’s masterpiece One True Thing, one might expect a more thorough emotional impact. That is not the case, however, as Ask Again Later relies on witty commentary to deflect any heartfelt examination of the impact a cancer diagnosis can have on mothers and daughters. In fact, though Emily’s mother’s illness is the impetus for her decision to quit both job and boyfriend, this novel is much more about her fascination with her father, who re-enters her life at about the same time.

This novel is told in brief snippets, chapters of less than a page or so, and the writing itself is tight and flawless. Davis’ prior work as a television writer is evident, as one-liners pepper the text. There are some very funny moments, especially when Emily gives in to temptation and dates a lawyer who’s six years her junior. And there are some poignant, introspective moments as well, especially near the novel’s end. Depsite being amused and entertained by the humor, I was left wanting just a bit more, both from Emily and from the author herself.

Edited to Add: Congratulations to Karin -- today's winner of the Book-a-Day Giveaway!
Posted by The Long and the Short of It Reviews at 1:33 PM