Review: All That Glitters 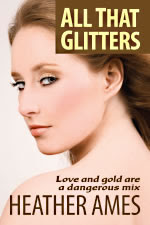 All That Glitters
by Heather Ames

Geologist, Crystal Penney loses her job and has to turn her inherited half of an Arizona ghost town into a money-making venture. She envisions a unique and refined tourist destination, but as soon as she finds itinerate prospector, miner and old flame, Cody Blye and his sullen mutt, Jackson already in residence, she knows her efforts to turn lemons into lemonade will sour faster than a gallon of milk left out in the noon day sun.

Crystal thought she’d never have to face Cody again after he took off into the Superstition Mountains and left her heartbroken. But thanks to the terms of their deceased uncles’ wills, he owns the other half of Cactus Station, and Crystal has to call him her partner, regardless of how she feels. She rebuffs Cody’s attempts to rekindle a friendship and keeps him at arm’s length while she tries to convince herself that she’s not going to fall in love with him all over again.

Cody has been involved in get-rich-quick schemes before, and Crystal suspects him of using his own nuggets to start a gold rush that brings droves of newcomers to Cactus Station. Suddenly, the old town is humming with activity while Cody and Crystal try to house and feed an army of people searching for the Mother Lode.

Jackson takes time out from terrorizing the guests to unearth a skeleton from the hotel’s attic closet. The find brings tourists, the press and the local sheriff, Reed Dalton. Reed might spend most of his time searching for lost hikers in the barren desert, but he throws himself energetically into a murder investigation after the coroner declares a hole in the skeleton’s head was the result of foul play.

And then Jackson digs up a gold doubloon. The Lost Dutchman Mine may be lost no more, and the good news spreads quickly, turning the gold rush into a near-riot. Cody’s doing what he does best--orchestrating the three ring circus with all the aplomb of P. T. Barnham. He’s selling tickets to see the skeleton, running tours and spinning yarns, all while trying to win back Crystal’s heart.

But his tall tales suddenly turn from fabrication to reality. Guests see apparitions; buildings collapse and fires threaten to burn down what’s left of the town. Someone wants the doubloons at any cost and isn’t worried about who gets hurt or even killed during the treasure hunt.

The sheriff’s investigation leads him to look again at a mine collapse that killed both Cody and Crystal’s uncles. Suddenly, Cody’s under suspicion for murder, and the guests, prospectors and tourists are all running back to civilization before they become the next victims.

Crystal believes in Cody’s innocence, but can she help him prove it? Even more importantly for both of them, can she learn to trust and love him again?

In All That Glitters, Ms. Ames takes a well-loved romantic genre theme and puts a refreshing new spin on it.

Crystal Penney and Cody Blye have inherited joint ownership of a crumbling ghost town in the Arizona desert. As they work together to breathe new life into the gold mining town – and cope with a gold rush! - the love they once shared bursts into flame again. The chemistry between them positively sizzles!

Ms. Ames has a special talent for painting the setting in this book, taking the reader into the hot, gritty flatland and the quaint but derelict town, overshadowed by wild mountains.

Into this mix she adds some believably eccentric characters, rumors of gold strikes and Spanish treasure, an allegedly haunted hotel, a very real skeleton in the closet, a hornery old dog and a nasty villain, and the story is pretty much unputdown-able. Oh, and did I mention that Cody, a tall, slender cowboy with a sense of humor, is a hero to drool over?

My only complaint would be that a little too long is spent in the middle of the book with the hero and heroine sniping at each other instead of talking things out – but having said that, I really liked this pair and wanted to see them do well. Isn't that the mark of a good story?

I enjoyed All That Glitters and would definitely recommend it to any romance lover who wants to spend a few hours lost in a good book.

Posted by The Long and the Short of It Reviews at 1:31 PM