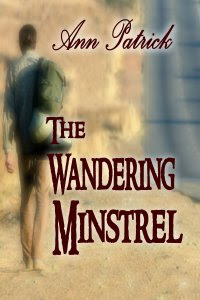 The Wandering Minstrel
by Ann Patrick

Picking up a hitchhiker was something that Jody had been warned about. The moment she stopped and the dark good looking man slid into the car, she knew he was going to be trouble. Trouble for her and all her plans for the future. He was cynical and world weary; she was just starting out on her career path. They had absolutely nothing in common, but the attraction between them was too explosive to ignore.

Her family and friends had often warned Jody about the dangers of picking up strangers on the road. And, until the beginning of this story, she has taken their advice to heart. However, for some reason she cannot seem to follow their admonitions when she sees a tall stranger hitchhiking. The stranger, known only as James, seems oddly familiar. It is not until few cities have passed, that Jody realizes who the enigmatic stranger is: it is none other than Cat Grant, a famous heartthrob and biggest singer ever! As their relationship builds, Jody finds it hard to believe that she could be an important part of Cat Grant’s life. Why would he want someone like her? Will the famous life that Cat leads and the ups and downs of a musician’s life tear them apart?

This novel follows a typical "romance" story line: they fall for each other but circumstances pull them apart and misunderstanding creeps in, only to be resolved when they admit their love for each other. The writing explains and portrays to the readers the various scenarios and emotions that the main character is feeling. However, I believe that adding Cat’s point of view as well would have a made it a much more fuller and exciting read.

I picked up this novel because Jody’s impulsive nature was something I could relate to. And that part of her personality is shown throughout the novel as she makes decisions and battles with different choices. This is a sweet read that will make any romantic happy!

Reviewed by Jasmine
Posted by The Long and the Short of It Reviews at 4:52 PM