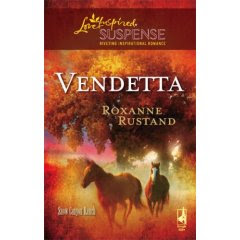 That was the McAllister family motto, wasn't it? Cole Daniels would never forget it—no matter how interested he was in pretty, kind Leigh McAllister. Thanks to lies told by her uncle, Cole's father was wrongly imprisoned. Now that Cole and Leigh were both back in Wolf Creek, Wyoming, he was sure Leigh held the key to clearing his father's good name. But his quest for justice was complicated by the escalating sabotage of Leigh's vet clinic and by his growing feelings for her.

Roxanne Rustand has done it again. This second entry into the Snow Canyon Ranch Trilogy proved just as exciting as the first and I found, to my surprise, that I liked Leigh even more than I did Janna in the first book.

Leigh returns to her home town as a vet and the first call she has to make is to her Uncle Gray's old ranch, a ranch she had been led to believe would belong to her family one day. For some unknown reason, though, Gray had sold it just before his death and the money has never been discovered. Worse of all, it had been sold to Cole Daniels. Not only had Cole's father been imprisoned for murder (and Gray and Leigh had testified against him),but Cole had broken Leigh's heart. Not an auspicious beginning.

There are mysteries on top of mysteries in this book and motives are hidden and disguised. Rustand does a remarkable job of keeping the suspense up as she builds up the feelings being ignited between these two.

The secondary characters are as richly drawn as the main characters and, once again, a little more light is shone on the internal struggles of the McAllister family. I'm waiting with bated breath for the third and final chapter in this family saga. I have the feeling Tessa's story may prove to be the strongest yet.

NOTE: If you have a private Blogger profile or a profile with no email address available, you must include an email in your entry -- this is how we inform the winner. If we are unable to locate an email for you, you're ineligible to win this prize. Thanks!

Posted by Long and Short Reviews at 4:00 PM