Review: Twice in One Lifetime 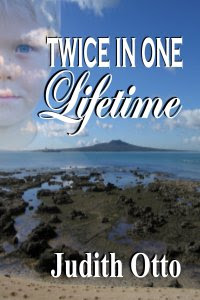 Twice in One Lifetime
by Judith Otto

Enjoying a dinner date, Rachel Hudson is startled when a man accuses her of running off with his unborn child. Unnerved she looks into the handsome face at a loss for words. Who was this man? Was he really her husband as he claimes? For the past two years of her life, Rachel has had no memory of her previous life. All she knows is that she’s lost a baby due to an assault. Is this the man who assaulted her? And if he claims to be her husband, why was he not there to protect her, on the night her life changed? She is ready to give this man a piece of her mind and walk away from him, when she learns about her son, Justin. Realizing that, if what this man says is true, she cannot desert her own son, she decides to stop running.

Struan Cassidy, after already dealing with a mother who walked out on him, cannot believe that his quiet, beautiful wife did the same thing. For two years he has been searching for her and finally found her in a restaurant having dinner with her “fiancé”. Is it something that he had done that caused her to run? Did she not love him and their son enough to stay? And why is she afraid of him? All these questions run through his mind as he confronts her. She might have gotten away from him when he was not there to stop her, but he is not going to let her get away from him now. Will Rachel get back her memories? Can she accept Struan’s love for her and can they work things out, even as danger lurks in the form of her former assailant?

This was a very well written story with very life-like characters. The story elaborates on the feelings and struggles of assaulted women. Each time somebody touches her, Rachel often tenses up and pulls back. Her struggle is described in detail as she tries to love a husband of whom she has no memory.

The story did drag in certain places. The many times that Rachel “almost” remembers her assailant leaves the readers in suspense. Many times throughout the story I wanted to “push” Rachel to identify her attacker. But overall, this is a very sweet story that reminds readers of second chances and the power of love. I recommend it.

Jasmine
Posted by Long and Short Reviews at 7:57 AM