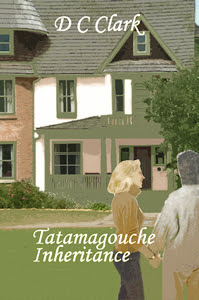 Erin Forbes has come to Tatamagouche intending to spend a quiet week at the rural ancestral property she is about to inherit. On vacation, Michael Cameron has also come to the village, searching for his family roots and a grandfather he has never known. Sparks fly when Michael confronts Erin with the revelation that they may be related. Erin knows this handsome stranger can only be an impostor, showing up to lay a claim to the family property. Attraction and trust retreat and rebound with each new development until the two are able to discover the truth about dark secrets in each family’s background. Understanding and commitment grow as the two conclude they do not want a repeat of the unhappy decisions made two generations ago. The future holds promise of happy ever afters being the true Tatamagouche inheritance.

Quietly sensual. Erin Forbes is a nurse who inherits the family property in Tatamagouche, Nova Scotia, after her grandfather passes away. Michael Cameron is tracing his family genealogy when their paths intersect due to a hidden scandal decades earlier. Could the two of them be related? Fighting a mutual attraction to each other, they team up to find the answer. Erin must cope with her grief and learn to trust again. Michael has his own life priorities and commitment issues to work through. Only by learning from the mistakes made in the past can they inherit the greatest gift of all.

I loved the Canadian history, culture and geographic descriptions in this book. I truly felt as if I were transported to the Maritimes on a summer day. Mr. Clark’s vivid imagery does a bang-up job of recreating Tatamagouche in the reader’s mind. The family scandal was a bit uncanny as my own family had a similar scandal decades ago that was kept hush-hush, but I enjoyed reading about the records searches by Erin and Michael. Initially, I had my doubts about a male romance writer being convincing, but the author proved me wrong by making me care about and empathize with both the hero and heroine. This book is a great escape from the hustle and bustle of daily life. The only thing missing was the recipe for Nanaimo squares.

Posted by The Long and the Short of It Reviews at 1:39 PM