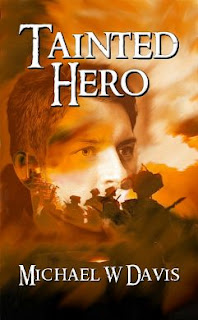 As a decorated Army Ranger, Eric Emerson is honor bound to defend the helpless, and trained to survive against a ruthless enemy, yet these skills were useless to protect his family from a faulted legal system. Riddled with guilt, he's torn between his combat training and the rules governing society. The conflict shatters his marriage, his job, and his sanity, until Samantha Cassidy saves him from his anguish.

Together, they unravel clues about a secretive Pentagon study and become targets from those determined to hide the truth. Sam and Eric share their secret past and disclose their feelings for each other. With Sam's help, Eric is able to vanquish the turmoil of his past, until he confronts Senator Robertson, sponsor of the Osiris study. The revelation about Osiris demand a horrific choice: ignore what they've found or become the seed that effects mankind's survival.

First let me say, it is great seeing a male romance writer. I think that Michael Davis has a real talent for writing romance. He has a way of looking at romance that only a man can. It is truly a unique book and Davis is a unique writer to the genre.
Tainted Hero is the story of Eric Emerson, a decorated Army Ranger struggling to come to terms with his past and his present. He is trapped in a failing marriage and struggling with feelings he has for another woman, feelings he has never acted on. To escape his troubles he accepts an assignment to evaluate a Pentagon Defense System. Assigned with him is Sam, the woman he has struggled for years to hide his feelings for.

The character of Eric Emerson was very convincing as a tortured soul. His daily struggles with his past and with the decline of his marriage are almost tangible. I liked that although his marriage had reached the point of no return he was determined to try and make it work, realizing that he was partly to blame for its collapse. He struck me as a man who didn’t like failure but also as a man who took his vows seriously. His friendship with Sam though was a major part of his problem. Women know when a man we live with has feelings for another.

Sam, was a great female lead, strong, smart, an officer in the Army and a single mother of a very precocious little boy. She has also had feelings for Eric, feelings kept hidden out of respect for his marriage. She was content, in a way to remain his friend, but when circumstances allow them to finally act on those feelings; they are thrown into a web of intrigue that could very well cost them their lives. Her son Ronnie, is a wonderfully written little boy. And the interaction between them was fun and clever. I also liked that Eric was willing to have a relationship with a single mother and willing to let the boy into his heart. I also like that Sam isn’t looking to Eric to save her, she can save herself. There is a sweetness to their relationship, that was refreshing.

I had a few problems with the start of the book. It seemed a bit slow at first, almost as though the author was struggling to find his footing. But as the writing progressed, I really started to enjoy his style. Davis has a very male way of looking at things, but it is in no way off-putting to a female reader. He keeps the romance angle of the story almost off to the side, allowing it to add to the suspense and intrigue of the story, instead of detracting. He is very knowledgeable about the military and it is very helpful to the story. I would have liked to have seen some of the stories told by the secondary characters as flashbacks instead of dialogue. But other than that it was a very fun and fast paced read. Michael Davis is a great addition to the romance community.

Review by Zinnia
Posted by The Long and the Short of It Reviews at 5:42 PM