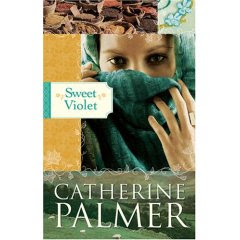 A missionary with no converts . . .
A lady with no manners . . .
An adventure like none before

In her silk sari and bare feet, Violet Rosse is anything but a proper English miss. Born in England but raised in India, Violet has fallen passionately in love with the flora and fauna of her adopted country. So when her father makes plans to ship her back to England to marry, Violet will do everything in her power to thwart his wishes and keep the only home she’s ever known.

In desperation, Violet’s father convinces frustrated missionary Edmund Sherbourne to find Violet and escort her back to England. Little does Edmund realize what it will mean to capture Violet and transplant her to foreign soil.

As Edmund and Violet cross paths in pursuit of impossible dreams, they embark on an adventure that will change their lives forever.

Sweet Violet was the third book in this series, and I’ll confess, that's the only reason I first began to read it. I was already drawn in by the characters of the first two books, so I figured I might as well read this one, too. Why did I hesitate? Well, because the book was set in India, and that didn’t really appeal to me. I wanted a Regency set in, well, England. But boy am I glad I didn’t listen to myself. Without giving too much away, I’ll let you know right off that not the whole thing takes place in India. They do eventually make it to England. That said, the scenes in India were also very well done and so colorful. It gave me a whole new perspective on that land and its inhabitants.

And now for more confession time. I also wondered how Catherine Palmer was going to pull off making a hunky hero out of a missionary. I know, that’s a terribly prejudiced thing to say, and all missionaries are true heroes in my eyes. But for the sake of fiction...well, I didn’t see how it was going to work. But let me say, this guy was every bit as swoon worthy as the bodice ripping hunks of steamier reads. Not an easy feat, but Catherine Palmer really pulled it off. A hunky hero mixed together with a strong, iron-willed, yet still vulnerable heroine who made you want to shake her and hug her all at once, made for a very entertaining read.

Highly recommended for women and girls of all ages.

Review by Violet
Posted by The Long and the Short of It Reviews at 5:40 PM