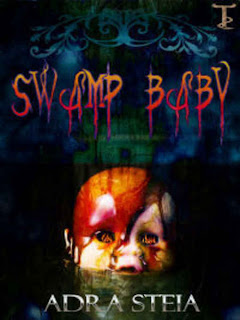 Suwannee lives in mortal fear of the swamp that borders her home. Generations of her family have been lost in the depths. Every night it calls to her, beckons her. Although her best friend Derry promises he won’t let anything ever happen to her, she wonders if she’ll ever be free of the deadly swamp’s siren song.

Michael loves the swamp with a passion, one that rivals that for his ex-wife. While she cowers in the shadow of the wetlands, he embraces it. When a vicious entity offers him an unimaginable power, he seizes it, despite the horrible sacrifice he must make.

Before Michael can help Spirit-Mother claim Suwannee, something else from the swamp does. Derry and Michael join forces to rescue Suwannee from the horrors of Hertley’s Swamp, but will Derry be strong enough to defy his brother and save the woman he’s come to love?

There’s a lot going on in this novel, and readers will need to pay close attention to the twists and turns of plot, as well as the multiple mysterious characters who show up with little introduction.

Swamp Baby begins with a human sacrifice to the swamp’s Spirit-Mother, an omnipotent power which has the ability to turn men into panthers to do her bidding. The paranormal is only one element of this story, however. Young women are disappearing in the swamp, and no one can find them. When Suwannee becomes one of the missing, her ex-husband Michael and her best friend (and new lover) Derry launch a rescue mission. Michael, however, has been possessed by the Spirit Mother, and his motive to find Suwannee is much more evil than Derry’s, who simply wants to find his beloved and carry her far away from the cursed town of Hertley’s Swamp.

Squeamish readers beware: this book is not for the faint of heart. Several scenes detail the torture and mutilation that the missing women endure, and there is a higher body count and more spilled blood in this short novel than any other I’ve read recently. In fact, my chief criticism of this novel is that it tries to do too much: it is both a paranormal story featuring shape-shifters, and a horror story with very real, very evil humans who find glee in torturing and killing others.

Despite the gore of Swamp Baby, however, this novel is quite well-written, with vivid details and scenes that will plunge readers into the heart of Hertley Swamp’s evil (you may not want to be there, but you won’t have any choice!). For the most part, the central characters are well-developed, though some readers may question why Derry and Suwannee remain so devoted to bad-guy Michael throughout much of the novel. For being a grown man, Derry is the most awkward, uncoordinated, and unlucky hero I’ve come across in a long time, utterly unable to defend himself against any kind of physical assault. But he remains endearing to the reader, and that’s a testament to the writing that makes him real and not a caricature.

Swamp Baby is apparently only the first in a series featuring these characters; as such, it does not have a particularly happy ending. However, the fast pace and high tension of this novel makes it a page-turner that will appeal to anyone with a yen for the paranormal and/or a little bit of the darkest Stephen King.

Reviewed by Dandelion
Posted by The Long and the Short of It Reviews at 12:03 PM