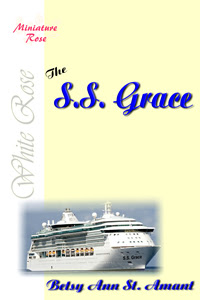 Savannah Dodson thinks this cruise will be the honeymoon she never had. But once onboard, her husband delivers a blow that threatens to drown her heart forever. Can Savannah and Austin find the grace they need to save their marriage? Or will it sink to its death beneath tumultuous waves?

After three years of marriage, Savannah and Austin finally get to go on their honeymoon. A lovely, tropical cruise, no less! But there’s no smooth sailing for this tormented couple. Will old hurts and past mistakes make this a good-bye cruise rather than the hoped for honeymoon they never had?

Not your typical little romance, this short story packs a lot into a small space. It deals with some issues that are close to my heart, about some of the reasons why so many marriages fail today. There is a much needed message in here that even couples who are not struggling in their marriage as the couple in SS Grace are, can learn from. Sometimes we need to stop and take a look at ourselves rather than pointing the finger at the other guy. And just when we think we’ve hit bottom, God sends help.

Once again, Betsy St. Amant draws in the reader with a character who portrays vivid, well developed emotions. And so realistic. At one point I felt my eyes well up with tears as I felt what Savannah felt.

I liked the way the heroine was quick to recognize her mistakes. It was a refreshing change from many of the attitudes of female main characters in stories today. Even so, like a true human being, she held on to her own self-righteousness, at least for awhile. Made it realistic. The setting of the cruise ship and vistas of the ocean and sky were described well, just enough to put the reader there, without being too much.

A short, clean read, but definitely not light hearted or shallow. There was nothing indecent in it, but because of the marital conflicts, a more mature reader might enjoy it, or at least sympathize with it more than would young girls. Recommended for women of most ages.

Review by Violet
Posted by The Long and the Short of It Reviews at 8:09 AM