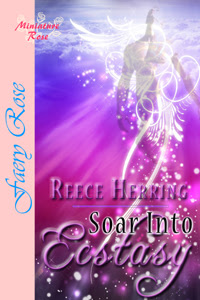 Soar Into Ecstasy
by Reece Herring

Beautiful and headstrong priestess, Rheasan, is honor bound to fulfill the virgin sacrifice her temple offers to their Goddess. That sacrifice and her honor are placed in serious jeopardy when Elisaph, a glorious winged man, falls into her life.

Despite conflicting obligations to enemy Goddesses, their mutual attraction is undeniable. Yet their fiery passion seems destined to remain unquenched as Rheasan and Elisaph struggle with their growing love for one another and their obligation to their individual Goddesses. The jealous Goddess, Euphrosyn decides to test Elisaph's loyalty by putting Rheasan in harms way. Elisaph must then decide what is paramount; his newfound love of Rheasan or his love for his Goddess. His life and her future hang in the balance.

For a short story, the plot was well developed and fulfilling. Their tale follows a classic formula for love stories--Rheason and Elisaph are thrown together by fate and instantly dislike one another, and through lots of adversity, their hearts find each other--but their adventure is revealed in an interesting and unique way. Ms. Herring hooks you with Elisaph, a gorgeous winged Anointed servant to the Goddess Euphrosyn falling through the trees and Rheason going to his rescue, but instead of gratitude, he offers her impatience and ill temper. From there, I wanted to know what would happen to these two.

I would have liked to see more of the relationship between the two of them from Elisaph’s eyes. From Rheason’s point of view, I had a pretty clear picture of why her feelings grew for him, but his reasons weren’t quite as apparent. Some of the dialog was a little awkward and inconsistent; the tone seemed to go between modern speech patterns and a more formal manner of speaking, so it seemed unnatural at times.

Overall though, a fun read. I recommend it as a most enjoyable way to spend a lunch hour.

Review by Camomile
Posted by The Long and the Short of It Reviews at 12:01 AM