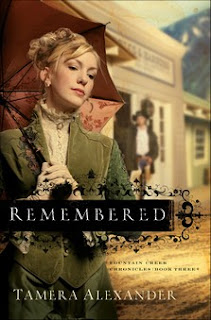 Though loss is often marked in a single moment, letting go of someone you love can take a lifetime...

The threat of war--and a final request--send Veronique Girard from France to a distant and uninviting country. In the Colorado Territory, she searches for the man who has held her heart since childhood--her father. Pierre Girard left Paris for the Americas to seek his fortune in fur trading, vowing to send for his wife and daughter. But twenty-five years have passed and his vow remains unfulfilled. Sifting through shards of broken promises, Veronique embarks on a dangerous search for a man she scarcely remembers.

His grief finally healed, Jack Brennan is moving on with life. After years of guiding families west, he is now working as a freighter to the mining towns surrounding Willow Springs. What he doesn't count on is an unexpected traveling companion on his trips up into the mountains, and how one woman's search will cause havoc with his plans... and his life.

When Veronique Girard, comes from Paris to the dusty Colorado Territory town of Willow Springs in search of a father she barely remembers, she has no idea what awaits her. She needs a driver to take her around to the neighboring mining towns where she believes her father might still be living. But not just any man will do.

Jack Brennan has spent the past thirteen years guiding wagon loads of families across the prairie. Determined to put behind him the pain of loss–and guilt–he’s carried around for years, he decides to settle down in Willow Springs. He’s not too happy about being forced to drive Veronique to the rough mining towns in the mountains surrounding Willow Springs, but he doesn’t trust any man other than himself to do right by her. Reluctantly, he agrees. But the lovely little French woman is more trouble than he’d bargained for.

This book is the ultimate romance. A strong and feisty, but likeable heroine, and the most swoon-worthy hero you could ever want. A beautiful setting, skillfully word-painted by the author to make you feel like you’re right there. And a plot that keeps you guessing right up to the very end. The romantic tension sizzled from the beginning, but the feelings that grew between the two were based on an affection that eventually turned into true love. Tamera Alexander dealt with the growing attraction between Jack and Veronique in a realistic but tasteful way. It was a good portrayal of how, even when temptation knocks, two people who are determined to remain pure will do everything possible to resist. In the end, the love that blossomed was so much stronger and, for me as a reader, more meaningful because the couple exercised abstinence.

Jack is a dream. He’s strong and handsome, and almost desperate, at times, to keep Veronique safe. Veronique is independent and even demanding at times, but vulnerable and feminine in a way that allowed me to really connect with her. I was rooting for them the whole way, and couldn’t stop reading until I reached the last page.

If all of that hadn’t won me over already, the tribute Tamera Alexander pays to the pioneering spirit of the Americans who settled the West would have. In a time when all we seem to get, even from within our own ranks, is criticism and revisionist history, Remembered is a refreshing and beautiful testament to the hardships and joys faced by those who came before us, who helped to make our country a great nation.

This was a satisfying read, and highly recommended for young women of most ages.

Review by Violet
Posted by The Long and the Short of It Reviews at 3:00 AM